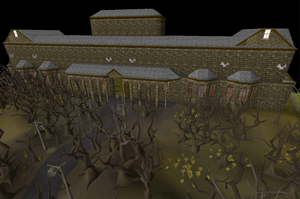 Draynor Manor is a large, haunted, mansion located north of Draynor Village. Its owner is Count Victor Draynor Drakan. The manor contains 4 floors and is a central location for 4 quests; Ernest the Chicken, Vampire Slayer, Animal Magnetism, and is visited briefly during Fairytale I - Growing Pains. It also holds a portal that grants access to the dimension where killerwatts reside.

Players with access to the Arceuus spellbook can cast a teleport spell that takes them directly to the manor doors. Players can also use the magic tablet equivalent.