Dream Mentor is a Fremennik Quest taking place on Lunar Isle. It revolves around helping an adventurer conquer his fear of combat using oneiromancy.

Items required: 3 kinds of food, 6-7 of each and(or log in and out 21 times) a Seal of passage. Runes for NPC Contact are recommended (air, cosmic, astral runes).

Travel to Lunar Isle. Changing spellbooks to the lunar set may help, as will carrying runes to teleport back to the bank.

Now, you have to reach 100% in all of his remaining stats. Once Cyrisus has reached 100% in all stats, he'll tell you that he's afraid of Combat. Afterwards, you'll agree to accompany him to the Oneiromancer—exit the mine, and go southward.

Items required: Goutweed, a hammer, a pestle and mortar and an astral rune.

In the upcoming fight, four bosses must be defeated in a row, without the use of prayers. The battle can be left at any time by using the right-click leave option on the lectern at the north edge of the arena, though the player will have to start the fight over from the beginning when returning. The lectern is the only way to leave, as no other teleports will work (including the ring of life).

It is highly recommended to use magic for the fight. All four bosses have very low magic defence, and magic will hit consistently even if you wear melee gear to reduce incoming damage. An excellent strategy is to use a trident of the seas, but Iban Blast or Blood Rush are also very good options. Strong melee armour, a shield with high ranged defence, and plenty of high-healing food are recommended. A halberd can also be brought to safespot the second and third bosses if desired. Lower-leveled players may want to drink a dose of divine battlemage potion prior to entering.

Note: Remember to not bank the seal of passage.

Go to the Dream Hall, the large building on the west side of Lunar Isle, where Cyrisus will be waiting for you. Light the brazier with a tinderbox, and talk to Cyrisus to enter the dream world. During the fight, a bar showing Cyrisus's Courage will be shown, and he will occasionally attack or use Vengeance Other on you.

You will then have to fight, in order, four monsters representing Cyrisus's fear:

After defeating the Illusive, Cyrisus will finally conquer his fear and stomp it to death.

Note: Do not bank your seal of passage after the fight. You will need it to finish up the quest.

Cyrisus transfers some knowledge to the player.

Travel back to the Oneiromancer on the south-east of Lunar Isle and talk to Cyrisus. He will thank you for helping him, and in gratitude uses Lunar Magic to grant you some of his knowledge. 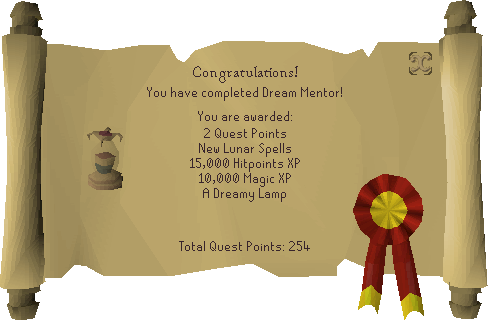 Completion of Dream Mentor is required for the following: