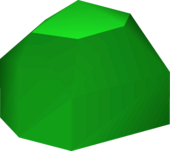 The druid pouch is an item first obtained during the Nature Spirit quest. Its main use is to protect the player against the ghasts that haunt the Mort Myre Swamp. To use it, the player must first fill it with nature items. These can be obtained by casting Bloom (either with the item given to the player during the quest or with a Silver sickle (b)) near fallen logs, branches, or dead bushes, which yield Mort myre fungi, stems, and pears, respectively. These items can also be purchased from the Grand Exchange, but since they have a relatively high price, it is generally cheaper for players to fill the pouch by harvesting their own nature items. Sullisceps on Fossil Island can serve as an alternate source of fungi if preferred. It should be noted that stems and pears provide more uses per fill, though spawn less frequently when Bloom is used.

Once the pouch has been filled, it can be used against the ghasts. If the pouch is used on an invisible ghast, or when one attacks, the pouch will activate, making the monster visible. The visible ghast can then be attacked and killed. It also protects any food that the player has in their inventory from becoming rotten.

If lost, an empty druid pouch can be reclaimed from the inside of the Nature Spirit's grotto - one respawns near the grotto pool.

Building the Fire of Dehumidification after completing Making Friends with My Arm is a strictly better, non-consumable alternative to druid pouches.