From Old School RuneScape Wiki
(Redirected from Druids' circle)
Jump to: navigation, search
The RuneScape Wiki also has an article on: rsw:Stone circle

Stone circles are holy sites of Guthixian religion scattered across the world of Gielinor. Stone circles are named such for their appearance, which is similar to that of the real-world Stonehenge. 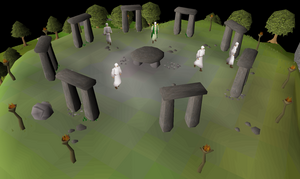 A ritual is performed to regain control of the Varrock circle.

The Stone Circle found in Taverley is the last surviving Circle still under Guthixian control. The circle is incredibly important to the druidic order of Taverley, it serving as their primary worship site as well as a place of study and research.

The Circle is overseen primarily by Kaqemeex, an important druid within Taverley.

Searching the stones several steps west of the Taverley Stone Circle is the solution to an elite cryptic clue: A Guthixian ring lies between two peaks. Search the stones and you'll find what you seek. 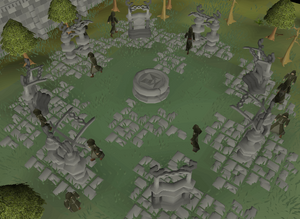 The stone circle of Varrock, now taken over by a Zamorakian cult.

The Stone Circle south of Varrock fell out of Guthixian hands in the year 19 of the Fifth Age, into the possession of dark wizards attempting to summon Delrith. There are many aggressive dark wizards there, so low-levelled players should avoid it. The stone circle is important in the Demon Slayer quest.

The druids are currently attempting to regain their hold on the Varrock Stone Circle. During Druidic Ritual, a potion is made using the Cauldron of Thunder that will reinforce Guthixian power in the Varrock circle, but the results are yet to be seen.