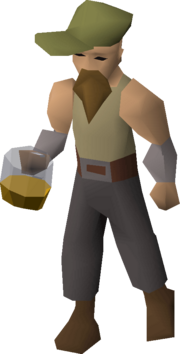 The Drunken Dwarf is a dwarf that lives in the dwarven capital of Keldagrim. He can be found in the building north-east of the kebab shop. The Drunken Dwarf recently claims to have witnessed an army of kebabs in a mine outside the city. He plays a large role in Forgettable Tale...

He is also either the brother, cousin or family-member of the random event Drunken Dwarf. However, he does not give out free kebabs or beer to players who ask him for it. While his counterpart travels around the world, he's taking care of his home until he comes back.

He asks the player for a Kelda stout in order for him to tell his story of the kebabs, which actually is a recap of what he found in the Red Axe's HQ hidden beneath Keldagrim, but nobody believes it because they just think it's a forgettable tale of a drunken dwarf, which is the title of the quest.

After drinking the Kelda stout, he recounts his history, telling about many things that at first glance don't make much sense, one of them being pink dragons, which the player decides to ignore.

It is revealed during the quest that his stories were true, but the army of kebabs was in fact an army of Chaos Dwarves developed by the Red Axe Mining Company, which had recently left the Consortium and Keldagrim after the events of The Giant Dwarf. But, he couldn't remember that because his memories had been erased by Grunsh, an ogre who used his memory-altering spell, which left him with a dangerous kebab-and-beer obsession as a side-effect.

A strange fact is that, while he seems to be drunk, he claims to be sober, but when you give him the Kelda stout, he says that he gets even more drunk, but his way of speaking shows that he's in fact sobered up, as he stops shambling and speaks perfectly like a normal person.

After the quest, he appears even more drunk than before, possibly because he drank the Kelda stout. He also tells about an army of mindless, kebab-eating dwarves and says: "THE KEBABSH WILL COME FOR YOU!".

Drunken Dwarf is the solution to the hard anagram clue: DR WARDEN FUNK. He is located next to the Food Shop in Keldagrim. He will give the player a puzzle box.