From Old School RuneScape Wiki
Jump to navigation Jump to search
The RuneScape Wiki also has an article on: rsw:Dungeon
This article is about the room that members can build in their house. For the underground caves found around Gielinor, see List of dungeons.
For a list of all items and upgrades within the Construction skill, see Construction/Level up table.
Dungeon corridorDungeon crossDungeon stairs 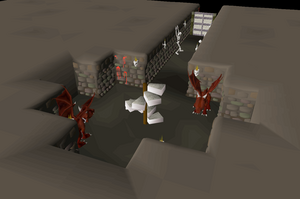 The dungeon is a room or set of rooms that can be built in the basement of a player-owned house. It can be built at level 70 Construction. The dungeon room, unlike other rooms, can come in 3 different styles, each with their own hotspots, and can be accessed via a skill hall, quest hall, garden, or formal garden. The three styles are:

Each part of a dungeon that is built counts as a room against the total number of rooms a player can have. For example, building a stairs room, a junction, and two corridors counts as four rooms. Some players who wish to build an extensive dungeon often end up removing other rooms they had previously built.

It costs 7,500 to make a corridor, junction, or stairs room. The cheapest way to build a dungeon is to construct a limestone spiral staircase in a quest hall and build stairs leading down. Assuming a quest hall already exists in the house, this would cost 30,000.

There are 7 hotspots available across all dungeon room types:

Guards are activated when challenge mode is turned on and will attack nearby players. Spicy stew/Construction tea can be used to boost to the required level. The invisible bonus of the crystal saw does not work.

Stairs can be used to connect to a skill hall, quest hall, or a dungeon entrance in a garden or formal garden above.

Used as obstacles. There is a chance that when a player steps on a trap, it will not activate. Players with higher Agility levels may also dodge the traps.