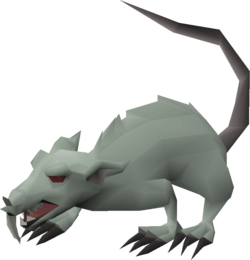 Dungeon rats are rare monsters found only in select members' dungeons. They play a key role in the Clock Tower quest in which players poison their food trough so that they attempt to escape by chewing away a railing, which allows the player to grab the white cog.

One particular variant of the dungeon rat, found once in the Goblin Cave and once in the western part of the Clock Tower Dungeon, has identical drops to rats.

All other dungeon rats only drop bones.