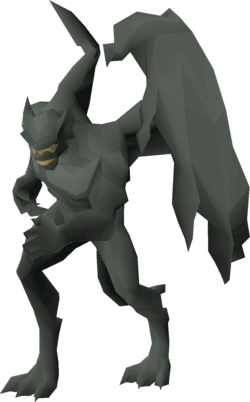 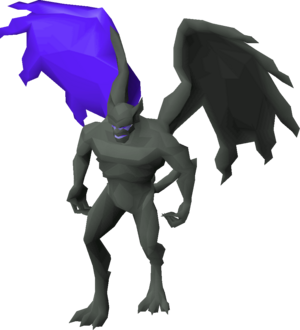 Dusk, along with Dawn, are the Grotesque Guardians that require level 75 Slayer to kill. It is the boss version of the gargoyle, found on the Slayer Tower's rooftop. In order to access the roof, players must obtain a brittle key from gargoyles while assigned them for a slayer task. Similar to other slayer bosses, such as Cerberus and the Abyssal Sire, the Grotesque Guardians can only be killed while the player is assigned gargoyles as a slayer task.

To initiate the fight, players must ring the Cloister Bell in the north side of the roof. This will trigger a cutscene in which the Guardians will awaken, and the fight will begin. After reaching a kill count of five, the cutscene may be skipped by right clicking the bell and selecting "Quick-start". Dusk is immune to magic and ranged attacks; only melee attacks will harm it. In addition, if players stand under Dusk in the 2nd or last phase (when they are only fighting Dusk), they will be trampled and receive 30-40 damage.

Like gargoyles, players must bring a rock hammer, rock thrownhammer or a granite hammer to defeat Dusk.

The player is knocked back by Dusk's explosive attack.

During this phase of the fight, Dusk's wings may glow, and will perform an explosive attack. If players do not run away from him when he does so, the player will be dealt 30+ damage and be knocked back. In addition, debris may fall around the roof, which can deal up to 10 damage and stun players for a brief period of time. Once his health has reached half, Dawn will return and perform a lightning special attack with Dusk that has an AoE of 3x3, rapidly dealing up to 5-10 damage per tick.

The player is damaged by the prison of purple flames, healing Dusk.

After defeating Dawn, Dusk will absorb her essence, and initiate the final phase of the fight. Here, he is stronger, can use melee and ranged attacks, and may drag players to a prison of purple flames. Players must escape the prison (by clicking anywhere outside it), or they will be dealt 60+ damage, which heals Dusk.

Dusk attacks with a crush style that rolls against the player's slash defence. If the player uses Protect from Melee, Dusk's damage is reduced by 80%.

In addition to the 100% drop of granite dust, the player will also have two rolls on the Grotesque Guardians' drop table.