Dust devils, are a slayer monster requiring 65 Slayer and completion of Desert Treasure to kill. When using Ice Barrage and fought in the Catacombs of Kourend, dust devils can provide high Slayer experience rates per hour, varying on how well the player can group them and collecting their loot. Valuable common drops like the Air battlestaff as well as Mystic air staff generally compensate the rune cost when bursting. Barraging generally loses money or breaks even, yet yields much better Slayer experience rates.

Additionally, having a bonecrusher helps save on Prayer potions since burying bones inside the Catacombs of Kourend also restores Prayer points.

Bank with preferred banking method; Kourend Castle has a bank on the second floor(UK). Use your house portal or Xeric's talisman to teleport to Kourend Castle. Investigate the statue in the courtyard to enter the Catacombs. Run east, then south, then east again. If your room has bloodvelds in it you went too far. This room and the southern room contain the dust devils.

The dust devils attack only with a melee attack. Protect from Melee will prevent all damage.

The dust devils use clouds of dust, sand, ash, and whatever else they can inhale to blind and disorient their victims. Players not wearing a facemask or slayer helmet will take very rapid damage that also drains stats. When using the slayer helmet to check how many kills you have left on the task, take care not to misclick on unequipping the helmet; this can quickly lead to a death with dust devils attacking you.

The most effective method for dust devils is to group and burst them in the Catacombs of Kourend. Turn on Protect from Melee, then attack the dust devils with a fast ranged weapon (such as darts or toxic blowpipe) to get them aggressive towards you. Run to a side which has two corners adjacent to each other and run back and forth between the two corners so that the dust devils clump into a small area. Switch to magic attack and use Ice Burst/Barrage. Since the dust devils have very little Magic defence, magical accuracy doesn't matter much, and players may choose to use equipment with high Prayer bonus to save Prayer potion doses, though you will want to keep your magic attack bonus higher than about -20. Equipment that increases magic strength, such as a Tormented bracelet, Ancestral robes, Imbued god cape, and Occult necklace are still worth bringing for their ability to increase your max hit.

Another option is to safespot using the corridors in between rooms to shoot/cast on the dust devils without the need to pray although, this is much slower than grouping. 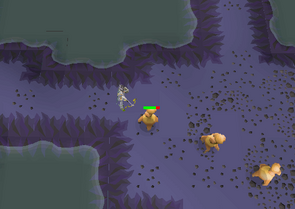 A safespot in the Catacombs, just south of the Warped Jellies.

Autocasting spells has 1 tick delay between player clicking a target and the spell being cast. To achieve maximum xp rates the player should manually cast every spell from the spellbook after moving. This way the spell is cast immediately, saving a lot of time in the long run.

This is the best-in-slot available equipment for maging dust devils. See the table below for an overview of equipment alternatives in case this setup is not accessible or too expensive.