Dwarf Cannon is a short quest about the conflict between the dwarven outpost at the Coal truck mining site and local goblins. The quest provides access to the Dwarf multicannon, a powerful Ranged weapon.

{"requirements":"None","desc":"For several years now, the Dwarven Black Guard have been developing the latest in projectile warfare.\n\nWith the constant attack of goblin renegades, the dwarven troops who protect the mines need to put this secret weapon into action.\n\nOnly with your help can the true power of this cannon be harnessed!","difficulty":"Novice","kills":"None","name":"Dwarf Cannon","start":"Talk to [[Captain Lawgof]], south of the [[Coal Trucks]], north-west of the [[Fishing Guild]].","length":"Short","items":"*[[Hammer]] (obtained during the quest)"} 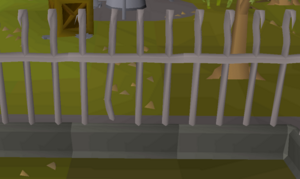 Broken railing in need of repair.

Talk to Captain Lawgof located south of the coal trucks (but within the gates). If you do not have the 20 Agility required to cross the log, you will need to enter the fenced area from the south via the gate. He will explain his dilemma of the goblin forces approaching from the south. He will allow you to temporarily join the Black Guard, the elite of the dwarven military. After you accept he will give you 6 railings and a hammer (if you do not already have one in your inventory) so that you can help with fixing the railings.

The damaged railings around the complex are clearly bent (if you zoom in and look at the fence directly from the back or front), repair these by "inspecting" the appropriate sections of railing. If you fail to repair a rail, you may take 1 or 2 damage or your Strength or Crafting will be temporarily reduced. This damage may kill you if your hitpoints are 2 or below. It may take several attempts at each damaged section, if it doesn't say you repaired it, and straighten the fence you must do it again.

After repairing all 6 rails, talk to the Captain. Captain Lawgof will explain that communication has stopped with the watchtower. Head south to the watchtower just south of the gate near the dwarf commander (just outside the fence in the woods indicated on the map by a ladder), and investigate.

Note: Make sure you actually finish the conversation with Captain Lawgof, otherwise the dwarf remains will not spawn.

Devastated, Captain Lawgof will tell you that the dwarf who had been killed when the watchtower was overrun was Gilob who had a son named Lollk that is still missing. 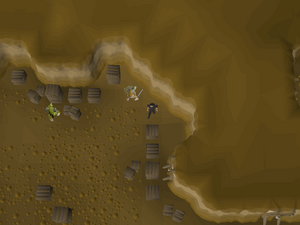 Location of the dwarf child in the Goblin Cave.

The cave forks into three passages. Take the centre passage and head north-west to find the goblin outpost. Go further north-west to a room filled with crates inside. Search the northern most crate on the east wall (as seen in the picture) and Lollk will jump out. After thanking you for rescuing him, Lollk will run back to Captain Lawgof. 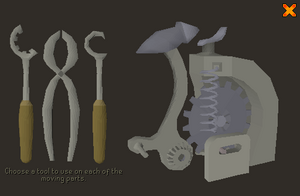 The interface shown when using the toolkit on the damaged cannon.

Return to Captain Lawgof, and he will thank you and ask you to fix his broken multicannon. Use the toolkit he gives you on the cannon. You need to match up the three tools with the three parts on the screen that shows up.

Talk to Captain Lawgof again, and he will tell you that he doesn't know how to get ammo for the cannon. He will tell you to go to the dwarf base south of Ice Mountain above the entrance to the Dwarven Mine to find out about the ammo.

Go to the dwarf base which is located directly south of the Black Knights' Fortress, north of Falador, and west of the Edgeville Monastery. The fastest way to arrive there is using a combat bracelet to teleport to the monastery. Alternatively you can teleport to Falador and walk there. Talk to Nulodion who is in the western building of the base. He will give you an ammo mould and some instructions.

Do not destroy Nulodion's notes or the ammo mould as Captain Lawgof requires these. Doing so will require you to go back and speak with Nulodion to retrieve the notes.

Go back and talk to Captain Lawgof. He will reward you for your efforts. 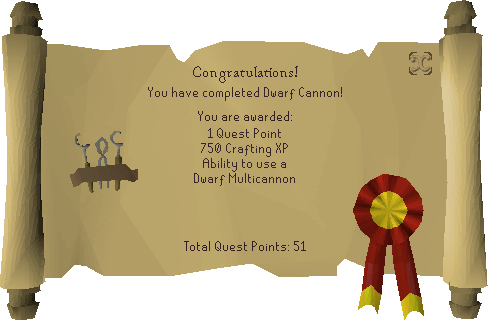 Completion of Dwarf Cannon is required for the following: 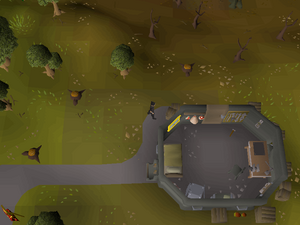 A player searching the boxes to complete a clue scroll.

Searching the boxes around the hut where the broken dwarf cannon is, close to the start of the quest (north-west of the Fishing Guild) is the solution to the hard cryptic clue, stating: Must be full of railings.