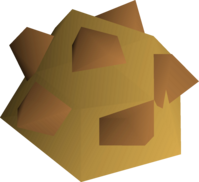 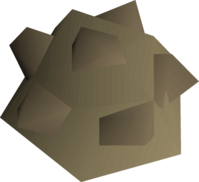 A dwarven rock cake is a quest item used in the Freeing the Mountain Dwarf subquest of Recipe for Disaster to free Rohak's son from the Culinaromancer. It is only made by Rohak after he is given 4 Asgoldian ales followed by the ingredients: an egg, a bowl of water, a pot of flour, and a bucket of milk.

There are two variants of the cake, the first is made by Rohak, which is hot. Attempting to pick up the hot rock cake without wearing gloves or using Telekinetic Grab will deal 1 damage, or 0 if the player has only 1 Hitpoint remaining, and the cake will drop to the floor. It can be cooled by any of the following methods:

Eating depletes 1 hitpoint when above 2 hitpoints. If at or below 2 HP, it will do nothing.

Guzzling depletes 10% of current hitpoints, rounded down, plus one. This will deplete 1 HP if currently at 2 HP, allowing to completely deplete to 1 HP. When at 1 HP, guzzling will still hit the player, but for 0 damage.

Neither eating nor guzzling are able to kill the player, nor do they destroy the rock cake, meaning only one extra cake is required for use outside of Freeing the Mountain Dwarf.

Because of the small hitpoint depletion, the rock cake can be seen widely used by people using the Dharok's armour effect. Some players use this as a method of keeping their hitpoints minimal while training at monkey guards.

The dwarven rock cake is also used in Nightmare Zone alongside absorption potions, as having only 1 Hitpoint left will maximise the potions' efficiency. Enemies cannot deal damage to a player higher than their current Hitpoints, and thus strategic use of the rock cake and overload potions will reduce incoming hits to deal only 1 damage, thus removing only 1 damage from the absorption. This method synergizes extremely well with Dharoking, but can be used to great efficiency with any gear setup and any combat style.