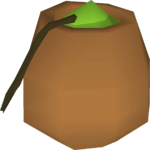 Dynamite(p) is an item made by using three cave nightshade on a pot of dynamite, which requires level 50 Firemaking to do. It is primarily used to kill NPCs without gaining combat experience.

When lit with a tinderbox, it will detonate and hit an attackable NPC in a 3x3 area after 5 ticks (3 seconds) for 0-4 damage, with a 25% chance of inflicting poison starting at 6 damage if the target took damage (providing they aren't immune). Only one poison dynamite can be lit at a time, and it will only hit one target, even in a multicombat area. Players can also directly use the poison dynamite on a target, which will then explode after a short delay. Both methods require the target to be at full health.

Poison dynamite cannot be used inside the TzHaar Fight Caves. Attempting to do so will result in the game chat message It's probably dangerous to set dynamite in so much heat and fire. It is also not possible to envenom monsters through the passive effect of a charged serpentine helm when using poison dynamite.