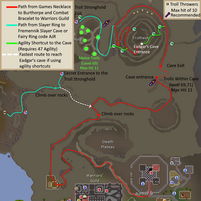 Use one of these routes to get to Mad Eadgar's Cave. Using fairy rings and the eastern agility shortcuts result in the shortest travel time.

(Required items: Note: You will need 21 inventory spaces to do this in one trip. Climbing Boots, Tinderbox, Pestle and Mortar, 2 logs, 5 raw chicken, 10 grain, Ranarr potion (unf), Herblore boosting item if below 31. Chicken, grain, 1 log and dirty robe can be handed in to Eadgar separately.) 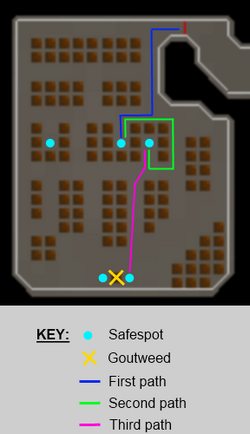 Run to the tile next to the goutweed; clicking on the goutweed to move to it will get you stuck on the guard.

You will take 0-6 damage if caught during the puzzle. Protect from missiles will negate this.

It is highly recommended you take 2 extra goutweed for Dream Mentor and Dragon Slayer II. You can only get one Goutweed per trip.

If you stand on the same tile as the door (where you end up when you select -Open Door-) and -search- the Goutweed Crate just before the two Guards meet right below (south of) the door you can run straight through, depending on how the trolls are synced, which can be slightly off on some worlds.

Another method is to start on the door tile like before and -search- Goutweed, just as the darker troll with a shield (slightly south-west of the door tile) makes its turn on the south-eastern corner of its square route (if you fail, remember which troll hit you and gauge the timing during your next try.

Flick Protect from Missiles to avoid damage from the sleeping Guard. If you can't make it all the way in one go, use this same method of standing in the doorway & timing your run to the final hiding spot, tile just east of the goutweed crates. 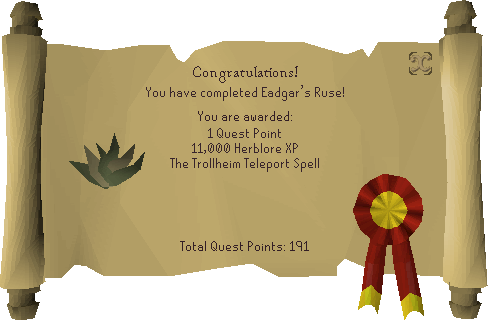