From Old School RuneScape Wiki
(Redirected from Eagle's Peak)
Jump to navigation Jump to search
The RuneScape Wiki also has an article on: rsw:Eagles' Peak
This article is about the quest. For other uses, see Eagles' Peak (disambiguation).

Eagles' Peak is a quest based on the Hunter skill, where the player helps the Ardougne Zoo procure a ferret as a new attraction. Rewards for the quest includes a new way to train the Hunter skill and a new form of transportation.

{"requirements":"*<span class=\"scp\" data-skill=\"Hunter\" data-level=\"27\">[[File:Hunter icon.png|21x21px|link=Hunter|alt=Hunter]] 27 [[Hunter]]</span> <sup>(<span title=\"This requirement is boostable\" style=\"cursor:help; text-decoration: underline dotted;\">boostable</span>)</sup>","desc":"The Ardougne Zoo is always looking for new specimens, but one of their anticipated new attractions - a ferret from the north - has been proving elusive.\n\nOne of the Zoo's more eccentric freelance specimen hunters is reported to be on the case, but after setting out for the far western reaches, somewhere between the Piscatoris Fishing Colony and the Tree Gnome Stronghold, nothing more has been heard from him.\n\nWill you be able to use your skills as a Hunter to track him down? What else will you discover at the mountain known as Eagles' Peak?","difficulty":"Novice","kills":"[[Kebbit]] ''(level 13)'' ''(optional)''","name":"Eagles' Peak","start":"Speak to [[Charlie]], one of the keepers at [[Ardougne Zoo]].","length":"Short","ironman":"[[File:Ultimate ironman chat badge.png]] You need to unequip your headgear and cape and have 6 empty inventory slots in addition to that.","items":"*[[Yellow dye]]\n*[[Swamp tar]]\n*50 [[Coins]]"} 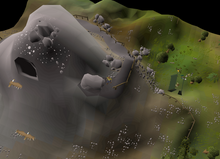 A player at the summit of Eagles' Peak.

Talk to Charlie the zoo keeper at Ardougne Zoo. He is at the south-west part of the zoo, just south of the scorpion cage. He'll tell you about a delivery of a northern ferret who managed to escape his cage while unloading. He will ask you to contact a huntsman called Nickolaus who agreed to capture another ferret, but he hasn't heard from him for some time. He will ask you to look for him. Finally, ask "Sure. Any idea where I should start looking?", and upon Charlie's answer, the quest begins. Charlie will tell you to start around the mountains just west of the Gnome Stronghold.

The location of the tent.

Head to Eagles' Peak, which is west of the Tree Gnome Stronghold. If you have access to the fairy ring network, code AKQ gets you there relatively fast. You can also use a necklace of passage and choose the second option "The outpost" and head north-west. At the base of the mountain on the north-west side, you should find a tent, but Nickolaus is no where to be found. Inspect the books on the ground, and you will receive a bird book. Try to read the book, and a metal feather will fall out of the book.

Follow the path up to the peak, which starts on the south side of the mountain, or use the Agility shortcut right beside the tent. At the top is a door (disguised as a rocky outcrop) with an inscription of a feather on the north side. 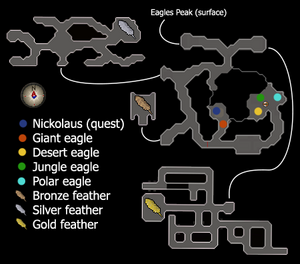 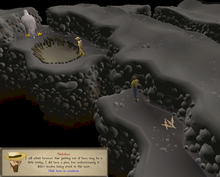 Nickolaus is trapped by a giant eagle.

Use the metal feather from the book to open the door. Then, go inside. A few steps into the cave, there is a feathered journal on the north side which contains some interesting info, but it is not critical to the quest. The passages split to three tunnels to other areas and another metal door (used later) and to a ledge over a large open area. Go the southern route where you see the giant feathers laying on the ground. Nickolaus is across the ledge, and you must click to shout to him. A cutscene will start when you shout to Nickolaus, who is trapped across a chasm by a giant eagle that will not let him out of the cave. Continue through the dialogue and ask if there is any way you can help.

Nickolaus tells you to make a disguise for him. Talk to him about eagles—mention that he is trapped and offer to help. Gather 10 eagle feathers (piles of giant feathers can be found near the area after you speak to Nickolaus and throughout the cave).

Teleport to Varrock and go to the Fancy Dress Shop in the south-east corner (inside of the gated area). Ask specifically about a couple of bird costumes, and Asyff will make you two giant eagle costumes using the 10 giant feathers, swamp tar, a yellow dye, and 50 coins. Each costume consists of an eagle cape and a fake beak.

With the two sets of disguises, return to the Eagles' Peak dungeon and shout to Nickolaus again. He wants you to bring the clothes to him.

Go to the south-west extremity of the dungeon, and then take the east path. You will find a large stone door with an eagle marking, which leads to Nickolaus. You cannot open the door in this state. Three feathers (bronze, silver, gold) are required to be able to open the door. 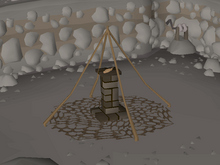 The bronze feather on a pedestal.

West of the eagle door is a tunnel. The tunnel leads to a room with a stone pedestal on which sits a bronze feather. Attempt to take the feather, and the obvious net trap will lift it upwards. Now, operate all four winches in each of the corners, causing the net trap to break. The pedestal will fall down, and it is possible to take the bronze feather. Leave and follow the directions to the silver feather cave.

Note: You cannot operate the winches before the net trap has activated.

The trail leading from the pedestal.

A bit further north, a second tunnel leads into another dungeon room, this time with an empty pedestal. You will need to have 27 Hunter to successfully inspect the empty pedestal. Inspect the pedestal, and a partial trail will appear. Follow the trail, and inspect the heap of rocks in the direction the trail points to. If you are correct, the trail from the pedestal is shown to the heap of rocks. Investigate rocks near where the trail ends—if correct, another trail will appear. Repeat until the trail leads to a tunnel in the wall. Click the tunnel in the wall, and a level-13 kebbit will attack. Kill it, or use the right-click "threaten" option, and it will drop the silver feather.

The golden feather on a pedestal.

(Note: If the puzzle gets messed up, there is a reset lever outside of the chamber.)

The third tunnel entrance is in the north-east corner of the main dungeon. You need to retrieve the gold feather from the pedestal at the end of a long corridor due west from the entrance, but the way is blocked by metal eagles and wing-shaped stone gates. The birds can be moved by putting bird seeds in the bird feeder close to the point where you need the eagle to go to. The eagle wings can be moved by pulling a lever. There are four levers and five metal eagles.

To start, take-from the Birdseed holder to get odd bird seed near the entrance to place in bird feeders. You'll need six to finish the puzzle. Follow the visual guide below which lists the sequence or the steps outlined below the visual guide.

You need to clear access to the north-west lever, by operating the south-west and centre levers. The north-west lever unlocks the eastern part of the area and gives access to the east lever. Although operating this lever clears a critical eagle wing blocking the corridor to the golden feather, there are still blocking objects from the actions to get to the east lever. Use the table above to remove any remaining objects blocking the corridor. 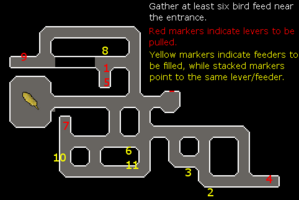 To solve the puzzle, follow these steps. Step numbers correlate with the picture to the right: 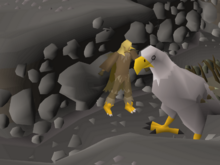 Walking past the eagle with a disguise.

After collecting all three feathers (bronze, silver and gold), use each feather on the eagle door to open it. Walk to Nickolaus and wear the full eagle disguise to "walk past" the eagle guarding Nickolaus. Not wearing a disguise will cause the eagle to hit you for a small amount of damage.

After a short conversation, Nickolaus requests you to meet him back at the camp.

A bit further east are three huge eagles (polar, jungle and desert). After the quest, they can be used as a transport system to the other Hunter areas from the South Woodland Hunter Area. 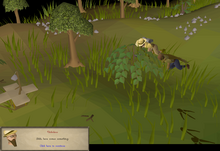 Catching the ferret for the zoo.

Go back out of the Eagles' Peak dungeon and go down the rock climb. On the ground where the tent you were at before is, talk to Nickolaus and he'll teach you how to catch ferrets. You do not need a box trap for this part of the quest. If you click on the cutscene where you retrieve the box trap, you will not catch the ferret. If you accidentally release the ferret, you are able to catch a new one with the box trap Nickolaus has given you. Go back to Ardougne Zoo with the ferret you caught. Talk to Charlie who gives the quest reward.

Note for diary completions: After completing the quest, return to Eagle's Peak with a rope. Riding each eagle to their destinations and then back to Eagle's Peak will complete medium diary tasks in the Fremennik, Desert, and Western Provinces.

A fast way to get to Eagle's Peak is to teleport to Eagle's Eyrie with a necklace of passage, then using a rope found nearby on the eagle to travel. 45 Strength is required to unlock the entrance to the desert eagles.

Lastly, if you want to unlock the jungle eagle's nest, bring a teasing stick, thatching spar, or garden cane to grow the vine for the entrance. (DO THIS LAST, as the vine takes approximately 40 minutes to grow and can't immediately be used to get back.) 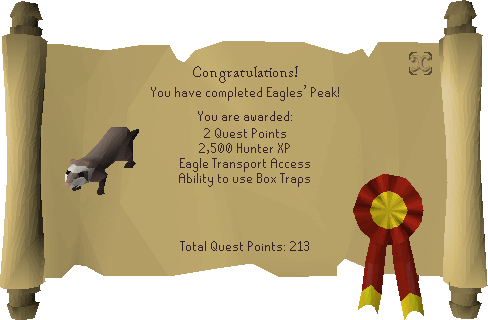 Completion of Eagles' Peak is required for the following: