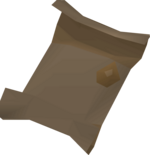 The earth warrior champion scroll is an extremely rare drop from earth warriors. It contains a challenge from the Earth Warrior Champion. In order to be eligible to receive the scroll, players must have 32 quest points.

Bring this scroll to Larxus in the basement of Champions' Guild. Go down the Champion Statue and through the portcullis to fight the Earth Warrior Champion as part of the Champions' Challenge minigame. During the fight, players cannot use prayers of any kind. Once defeated, you may exit through the same entrance. The scroll will be consumed upon defeat of the earth warrior champion.

The following text is transcluded from Transcript:Earth warrior champion scroll.

I challenge you to a duel, come to the arena beneath the Champions' Guild and fight me if you dare.