The Ectofuntus is in a temple located to the north of Port Phasmatys. Worshipping at the Ectofuntus rewards 5 Ecto-tokens per worship and will grant 4 times as much Prayer experience compared to burying the bones. This method saves a lot of money but is more time consuming.

In order to use the Ectofuntus for Prayer training, it is strongly recommended to have completed the Ghosts Ahoy quest. The ectophial, which is one of its rewards, gives a direct teleport to the Ectofuntus and can dramatically decrease travel time taken to bank.

The Ectofuntus is used to refill the ectophial after using it to teleport and can be refilled an infinite amount of times.

The Vampyres of Morytania came to the port town long ago, demanding blood tithes. The inhabitants were willing to do anything to stop them and, therefore, turned to the evil wizard Necrovarus, begging for help. Necrovarus told them to start digging to the north of the town and not to stop until they found a large pool of green slime. So, they did and discovered Ectoplasm. Then, he ordered a temple to be built above the pool, and in that temple, is a large fountain: the Ectofuntus.

Once everything was finished, the fountain emitted unholy power, creating a large force field around the settlement. This defended the town from the Vampyres, who couldn't breach the barrier. There was a horrible side effect, however, that Necrovarus counted on: all the people of Port Phasmatys died and their souls, instead of passing into the next world, were trapped by the field. From that day onward, Port Phasmatys has been a town inhabited solely by ghosts. All this was the real intent of Necrovarus, who planned to use the ghosts and the power of the Ectofuntus for his own evil ends, until he was thwarted in the Ghosts Ahoy quest.

Worshiping the Ectofuntus gives 400% the normal experience. Although this is the highest guaranteed per-bone prayer bonus in the game, this is much less than the 700% theoretical average bonus at the Chaos Altar. This is due to the 50% chance of the Chaos Altar not consuming bones.

A tour of the site[edit | edit source]

One ghost disciple haunts this floor and will explain the workings of the bone grinder.

6. Staircase (down to the ground floor[UK]1st floor[US])
7. Bone grinder
8. Necrovarus's coffin (The coffin room is unlocked during the Ghosts Ahoy quest. Once unlocked, it can subsequently be entered without using the key from the quest.) 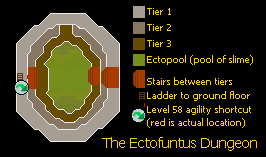 The dungeon is entered through the metal trapdoor on the ground floor[UK]1st floor[US]. The only object of interest in the dungeon is the Ectopool at the centre, where players can fill buckets with slime.

The dungeon is organised in four tiers, descending in turn from the outer tier (Tier 1 on the diagram) to the innermost one (Ectopool on the diagram). Although the dungeon looks compact, the tiers and placement of the stairs actually results in a considerable walk from the ladder to the ectopool, as on each tier, the player must walk all the way to the other side to get to the stairs. 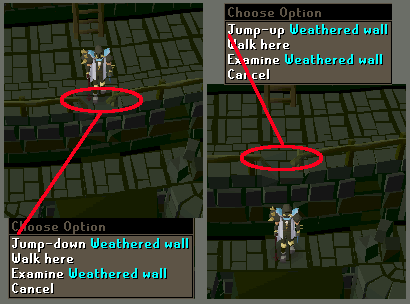 Shortcut between Tiers 1 and 2

The level 58 Agility shortcut greatly cuts the time it takes to walk to the ectopool. The shortcut can be used in both directions. From the ectopool, however, players with the Ectophial in their inventory can use it to return to the ground floor[UK]1st floor[US] even faster.

How to worship[edit | edit source]

A ghostspeak amulet or Morytania legs 2 must be equipped to talk to the ghost disciples to receive ecto-tokens.

The recommended inventory when using the Ectofuntus is: 9 buckets, 9 pots and 9 bones of any type, and an ectophial. To collect ecto-tokens, a bucket or pot will need to be dropped. Alternatively, a stamina or super energy potion can be used to maintain run energy.

Buckets of slime can be purchased from a Charter Crewmember on the Port Phasmatys dock, which have a stock of 10, then hop worlds to buy more.

Gilded altars or the chaos altar provide better Prayer experience per hour, however without access to a player-owned house one or the Wilderness being too risky, this is the best, safest alternative. 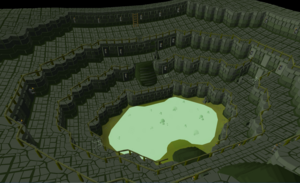 Take empty buckets and enter the trapdoor to the west, near the Ectofuntus, and travel down the stairs. The weathered wall shortcut requires 58 Agility and will shorten the journey considerably. At the bottom of the stairs is a pool of slime, use an empty bucket on it to obtain a bucket of slime. An ectophial, obtained from completing Ghosts Ahoy, will make the return trip instant by teleporting back to the Ectofuntus after collecting slime which makes the inventory slot it takes worth it. 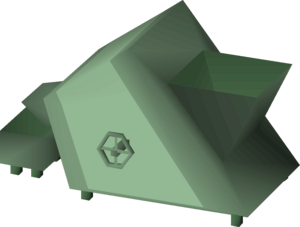 Take 14 of the desired bones and one empty pot for each. Go up the stairs east of the Ectofuntus. Use a bone on the loader of the bone grinder, make sure to use the bones and not bury them. The whole process is automated and will continue to grind each bone until there are no pots available to empty into, but interacting with each part manually will speed it up. Banking via a ring of dueling and returning with an Ectophial, with 13 bones and pots each, will be about ~280 bonemeal per hour.

With equal amounts of buckets of slime and pots of bonemeal worship the Ectofuntus to receive Prayer experience for 400% experience compared to normally burying bones. Talk to a ghost disciple while wearing a ghostspeak amulet or Morytania legs 2, 3, or 4 to receive ecto-tokens. Each worship will earn 5 ecto-tokens.

The Ectofuntus will only hold 1,000 ecto-tokens, 200 worships worth, before further attempts produce the message "There isn't room to put any more in.". The ecto-tokens must be collected to continue worshipping.

Weight-reducing gear is recommended, such as graceful clothing or boots of lightness and a spotted or spottier cape. The ectophial teleport to the Ectofuntus and an amulet of glory or a ring of dueling to teleport close to a bank is also recommended. The Crafting or Fishing cape along with Morytania legs 3/4 are other good options for banking.

Method 1: For players looking to reduce the amount of trips made, the most efficient way to use the Ectofuntus is to first get all of the slime required (recommended, as mentioned above, to purchase from the Charter Crewmembers and world hop), then grind half of the amount of total bones in lots of 12 per trip. Afterwards, the inventory setup would be 12 buckets of slime, 6 crushed bones, and 6 uncrushed bones if using teleportation runes, or 13 buckets of slime, 7 crushed bones, and 7 uncrushed bones if walking to the bank or using teleport jewellery. This setup results in the minimum amount of trips possible for grinding and worshipping, versus the traditional setup of 9 bones, 9 pots, and 9 slime buckets.

Method 2: For more experienced players, there is a slightly faster method, which utilises teletabs or the rune pouch. For this method to work optimally, players must have an ectophial, 58 Agility and have completed the medium Varrock Achievement Diary. A reward for completing the diary is the ability to change the location of your Varrock teleport to the Grand Exchange. Simply walking a bit north using a Varrock tab, allows for quick and cheap access to a bank. A rune pouch filled with law, fire, and air runes may be used instead of the teletabs. Lastly, instead of a rune pouch you may wield a smoke battlestaff and carry law runes in your inventory. Therefore, an optimal inventory for gathering buckets of slime would consist of: Ectophial, Varrock teletabs OR rune pouch OR smoke battlestaff and law runes, and 26 buckets. This puts your route as follows: Ectophial teleport, use Agility shortcut, gather slime, use Varrock teleport, bank and repeat.

For bonemeal, you would follow a similar plan. Your inventory would consist of: Ectophial, Varrock teletabs, 13 pots, and 13 bones of your choosing. The route is also the same: Ectophial, grind bones, Varrock teleport, bank, repeat.

As such, this method does recommend that players separate the job into three stages. Getting the slime first, then grinding bones, and finally worshipping, using the same method as before.

Note that alternate means of teleportation may be cheaper, such as a ring of dueling, to teleport to the Castle Wars bank chest. However, using jewellery is more click intensive, and more prone to mistake (accidentally teleporting to the Emir's Arena, for example). Since for jewellery, you have to right click, then left click, and constantly withdraw new items when they break, players will find that one click teletabs are a more simple, faster, and fool proof way to get around.

If players have completed at least the easy Morytania Diary, they can perform efficient slime collection runs to the Ectofuntus slimepit. This is done by using the Ectofuntus Pit Teleport option on the Morytania legs to teleport to the slime pit with a full inventory of empty buckets and then banking with an amulet of glory, ring of dueling, or other equippable items that have a teleport close to a bank. Players who have completed the Easy diaries may teleport in this way up to two times a day, collecting up to 56 buckets of slime, while player who have completed the Medium or Hard Diaries can teleport up to five times a day, up to 140 buckets of slime a day. Players who have the elite Morytania Achievement Diary completed can teleport an infinite amount of times.

Buckets of slime can be stored or used immediately.

If players have the medium, hard or elite Morytania Achievement Diary completed, they can speak to Robin Hood in the Port Phasmatys pub to convert 13, 26, or 39 bones per day, respectively, into Bonemeal. These bones cannot be noted and players will also receive the equivalent amount of slime from Robin, so make sure to only bring 13 bones at a time - similar to an ectofuntus run. Collecting bonemeal and slime from Robin allows from one to three (depending on Diary status) efficient trips to the Ectofuntus that do not require bone grinding or slime to be collected.

This reward can be used to semi-passively gain 4,000, 8,000, or 11,000 Prayer experience on a daily basis (using dragon or wyvern bones) as the process shouldn't take more than 10 minutes even with three trips (Elite).