Edgeville is a small town located at the border of the Wilderness available to free players. In the early development of RuneScape Classic, Edgeville only had empty buildings. It was commonly referred to as "Ghost Town" until items were placed in the buildings and was given an official name, Edgeville. Edgeville is also a popular town to trade player killing-related items. This includes sharks, various potions, dragon weapons, and other combat related items. It is also the bank used by players training Runecraft via the Abyss. Edgeville is also popular with high levelled members who own several amulets of glory, as it is the fastest bank to get to via a teleport.

Edgeville only has one bank. It is in the very centre of the town, and is often full of player killers, so it is a great place to sell food from Cooking, and other common player killing goods.

It is also popular with higher level players who own several amulets of glory as it is currently the quickest bank to get to via a teleport - very slightly better than the glory teleport to Draynor Village, and about the same as a ring of dueling to Castle Wars bank but without the cost of the ring.

Edgeville only has two stores. One is a general store. However, it is not as popular as Varrock's or Falador's general stores.

Perdu is a travelling dwarven merchant found on the 1st floor[UK]2nd floor[US] of the Edgeville General Store. He will return certain reward items to you if he thinks you have lost them, although his prices are higher than what you would pay elsewhere. The items on Perdu's list are things that you normally could get back for free, or for a smaller payment of coins.

Edgeville has two great yew trees just a little south of the bank in a destroyed building. Because of the trees being so close to the bank, many players like to cut these yew trees and transport them quickly to the bank when their inventory is full and repeat.

There is also a willow tree east of the bank which is not so popular, but is very useful for Woodcutting training.

Next to the willow tree is a patch of several normal trees, which are popular for low level Fletching training.

Edgeville has a dungeon entrance right beside the yew trees in the destroyed mausoleum. It is an underground dungeon and is home to a variety of monsters, including skeletons, hobgoblins, zombies, and Hill Giants. The giants' lair had been expanded by Jagex several times over the years. The giants' lair is often full of players fighting Hill Giants because of the giants' drops, which include big bones. Low level players are often advised to stay away from this dungeon.

There is also a mid-size mine at the centre of the dungeon and it is guarded by level 25 skeletons, bothering mid and low level players. This mine contains adamantite, mithril, silver, coal and iron rocks.

For members, there is a part of the dungeon that is actually in the Wilderness. In this part you can find chaos druids, earth warriors, black demons, lots of red spiders' eggs respawns, and the demon Chronozon for the Family Crest quest.

In this dungeon you can also find Vannaka, a mid-level Slayer Master.

At the far east side of the dungeon, there is an Agility shortcut that leads to the Varrock Sewers.

Edgeville has a range and a stove. The range is on the 1st floor[UK]2nd floor[US] of the general store and the stove is in Evil Dave's house just west of the bank. The stove is very close to the bank, so it's a great place to withdraw food, cook it on the stove, deposit it in the bank, and repeat.

Players can fight the guards at this jail. The jail also has a respawning iron mace. Krystilia, a Slayer Master, is located in a jail cell. She can assign Wilderness Slayer tasks, and can change players' respawn to Edgeville for a one-time fee of 5,000,000 coins.

There was a furnace added in an update as part of the Achievement Diaries. There are no requirements to use the furnace, but members can wear Varrock armour 1 or above to obtain a bonus smelting chance (a 10% chance of smelting 2 bars at once, with higher Varrock armours allowing higher level metals). 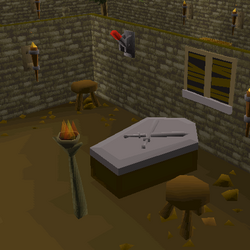 There is a teleport switch leading to the high-level Wilderness from the ruined building south of the bank. Pulling the Edgeville lever teleports the player to the Deserted Keep in level 56 Wilderness. Bring a knife or a slash weapon to cut through the web to get out of the Deserted Keep. Beware of running into player killers.