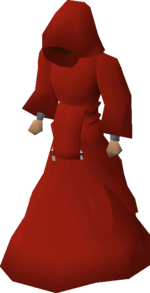 Elder Chaos druids are high-level mages that are extremely dangerous compared to their low-level counterparts, the chaos druids. Elder Chaos druids use Wind Wave, which is fairly accurate if players are not properly equipped. They can also cast a teleportation spell that brings players within meleeing distance if the player tries to evade the battle (if there is multiple targets, even if they are attacking someone else, they will attempt to teleport the person who is running that has done the most damage to them before others). The special closely resembles abyssal demons. Elder Chaos druids are a popular place for multicombat player killing. It is suggested to use Protect from Magic when killing these; otherwise, they can be very dangerous and can kill unsuspecting players very quickly. The altar nearby can be used to restore prayer points. Players fighting Elder Chaos druids should be wary of player killers attempting to skull trick them. This involves the perpetrator dressing up as an Elder Chaos druid and waiting for the unsuspecting victim to attack the player killer by mistake, thus obtaining a skull.

Elder Chaos druids reside in the Chaos Temple, 13 levels deep in the Wilderness. Because of the short distance from the altar within the temple, players with 37 Prayer or higher often train on Elder Chaos druids while using the Protect from Magic prayer. Training on the druids requires little resources and is relatively safe, aside from the inherent dangers of being in the Wilderness.

There is a 1 in 129 chance of hitting the robe subtable.