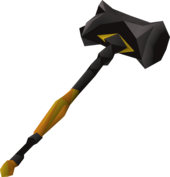 The elder maul is a two-handed crush weapon that requires Attack and Strength levels of 75 to wield. It can be obtained as a possible reward from the Chambers of Xeric.

It is the highest tier crush weapon available in Old School Runescape. It overtakes the godswords as the weapon with the highest strength bonus; however, it lacks a special attack. Despite the strength bonus, the abyssal bludgeon often has higher overall damage output against low-defence monsters because of its quicker attack speed. However, the elder maul's higher accuracy and higher max hit generally gives it an advantage in terms of damage output against targets with higher Defence levels, such as Tekton. Because of its high damage per hit, it is also often used as a knock-out weapon in player killing.