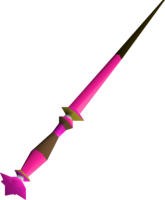 The elder wand was a wand requiring 75 Magic to wield that can autocast Ancient Magicks. It was only available from the supplies table in an unrestricted world during the week of 18 August 2016 to 25 August 2016.

Due to the wand being released as a beta weapon with the intention of testing its power, its graphics and appearance was a pink master wand, and did not represent the final design. Its final design featured an improved magic damage bonus and was renamed as the kodai wand.