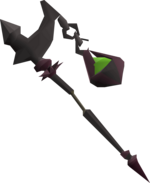 The eldritch nightmare staff is a staff that is created by attaching an eldritch orb to the nightmare staff. Requiring level 75 Magic and 50 Hitpoints to wield, it can autocast offensive standard spells as well as Ancient Magicks. The upgraded staff is untradeable, but it can be reverted to its tradeable components at any time. If lost on death in the Wilderness, the killer will receive the staff and the orb.

The eldritch nightmare staff has a special attack, Invocate, that consumes 55% of the player's special attack energy to hit the target for a high amount of damage, and restores the caster's prayer points by 50% of the damage dealt. Invocate can boost the caster's prayer points above their prayer level (like the ancient mace), up to a maximum of 120. The special attack does not consume runes. The special attack will restore prayer even if used against a target that has lower health or has immunity to conventional weaponry, similar to the saradomin godsword. For example, kurasks can only be harmed by leaf-bladed weaponry, broad bolts, or the Magic Dart spell. If the eldritch nightmare staff would have hit a 40 on the kurask (which would result in 0 damage because it is not a leaf-bladed weapon, broad bolt or Magic Dart), it would still give the player 20 prayer points. The same also applies to any killing blows by the special attack; if a target had 2 hitpoints remaining and was struck with a special hit that would have dealt 60 damage, the player would still be given 30 prayer points.

The base damage for Invocate is scaled based on the player's Magic level, ranging from 39 at level 75 to 50 at level 99, which can be increased with magic damage boosting items. At level 99, the maximum possible hit is 60, or 67 while on a Slayer task with an imbued Slayer helmet (i) or Black mask (i).

The special attack will also not damage Aviansie, giving the message "The Aviansie is flying too high for you to attack using melee." and thus non effective against them.

Players may use the weapon's special attack for training as it will greatly reduce prayer usage over time. It is particularly effective on slayer tasks that require protection prayers. While its special attack allows for very effective prayer restoration, it does not heal the player like those of the Saradomin godsword or Toxic blowpipe.

This variant of the nightmare staff is a very good choice to restore prayer points on the pillars during the fight with The Nightmare, since you do greatly enhanced magic damage.

This staff is also a popular choice to use at the Inferno to conserve supplies.