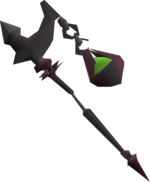 The Eldritch nightmare staff is a staff requiring level 75 Magic and 50 Hitpoints to wield. It is only available from the tournament supplies table in a tournament world as a test weapon for players. It is one of the proposed rewards for Nightmare of Ashihama. It can autocast offensive standard spells as well as Ancient Magicks.

The eldritch nightmare staff has a special attack, Invocate, that consumes 75% of the player's special attack energy to hit the target for a high amount of damage, and restores the caster's prayer points by 50% of the damage dealt. Invocate can boost the caster's prayer points above their prayer level (like the ancient mace), up to a maximum of 120.

The base damage for Invocate is scaled based on the player's Magic level, ranging from 39 at level 75 to 50 at level 99, which can be increased with magic damage boosting items. At level 99, the maximum possible hit is 62, or 70 while on a Slayer task.

As the weapon is being tested, the special attack animation uses a recoloured animation of Claws of Guthix as a placeholder.