From Old School RuneScape Wiki
Jump to navigation Jump to search
The RuneScape Wiki also has an article on: rsw:Elemental Workshop II 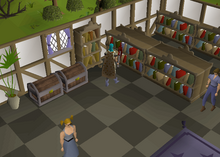 The bookcase in which the beaten book is located.

To begin, you need to go to the Exam Centre south of the Digsite. Search the North Facing bookcase on the east wall (South of the two chests. Not the one directly beside them however) of the south-eastern bookcases, and you'll find a beaten book with a scroll in it as a bookmark. Read the scroll, and then head to Seers' Village. Do not get rid of this book before the end of the quest; if you do, you will not be able to make the helmet out of the primed mind bar. 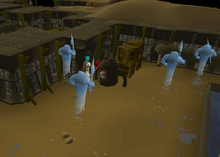 If you don't already have the battered key, head to the building south-west of Seers' Village Bank, and search the north-east bookcase to get a battered book and a battered key. Go to the workshop in the building with the anvil, and let yourself in the same way as in the Elemental Workshop I quest.

Next, go into the northern water elemental room and search the machinery to the south-west side of the room. You will receive the key used to unlock the hatch in the main room.

Note: If you do not read the scroll, you will not get the search option for the machinery.
Note: Before you go down, quickly "mine" two elemental ores (three if you desire a mind shield) from the west room, and smelt them into elemental metals in the south room (you will need 4 coal per elemental bar). Ironmen may find coal at the mine west of Seers' Village; 20 Agility is required to access it through a shortcut.

Go to the middle of the room and use the key on the locked hatch. Once you're downstairs, you need to fix the machinery. First, go to the "Schematic crate" (directly beside an old lever) to the south and take both the crane and the lever schematics. Then go back upstairs and use one of your bars on the workbench and make the crane claw. Do not make a helmet yet! Now, go back down and pull the south-western lever right next to the old crane, and then use the claw on the crane.

Next, head up the small stairs to your west (not up the hatch, but onto the metal construct) to get to the upper level. Open the junction box in the west to work on the pipes for the press (click on the ends you want to connect). You'll want to arrange them as seen on the left.

Use the pipe on the broken pipe upstairs on the northernmost point of the scaffolding. Then for the cogs, take them back down the steps to the wind tunnel on the east side of the track. On the side of the wind tunnel are three pins (under 2 yellow directional arrows). By using the cogs on the machine pins, you want to stick the small one on the upper-left pin, the medium one on the lower left, and the large one on the right. 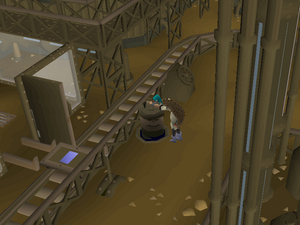 One of the many steps to creating a primed bar.

Do this twice if you want the shield.

A bit of mind draining.

Go down one more level to where there are two doors, one with the mind symbol and the other with the body symbol. Go into the mind room (nearest), and place your bar on the extractor gun and operate the extractor hat next to it. A part of you will be drained into the bar turning it into a primed mind bar. This will temporarily lower your Magic level by 20.

NOTE: You can power multiple bars while here (to make shield at same time upon returning 2 levels up) but each time will drain your magic by 20 (ie. 2 bars in a row will be -40 magic).

Now, you simply need to pick up the bar from the extractor gun, and go back up to the workshop, and make a mind helmet out of the bar you just made, and the quest is complete. MAKE SURE YOU HAVE THE BEATEN BOOK IN YOUR INVENTORY OR YOU WILL MAKE A MIND SHIELD.

At this point you will also be able to make a Mind shield, but this will not complete the quest, only making a Mind helmet will do. 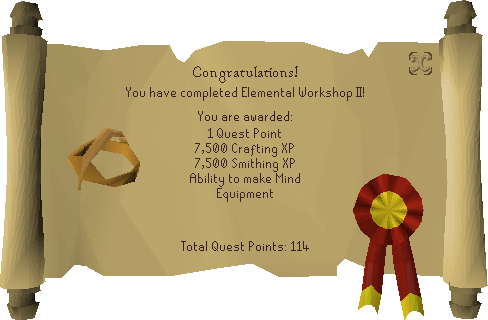 Completion of Elemental Workshop II is required for the following: