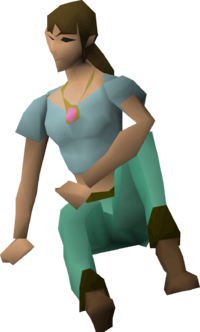 Elena is heavily involved in the Plague City, Biohazard and Song of the Elves quests. In Plague City, you are to save her from her entrapment in West Ardougne. In Biohazard, you are to aid her deliver 3 different chemicals to a scientist in south-east Varrock. After Plague City, you may find her in her house in north-west of East Ardougne. After the Ardougne Revolution and the escape from Lord Iorwerth during Song of the Elves she can be found by the pond and farming patch in the south-western corner of Lletya. Following the events of Song of the Elves, Elena can be found among the Meilyr Clan within Prifddinas.