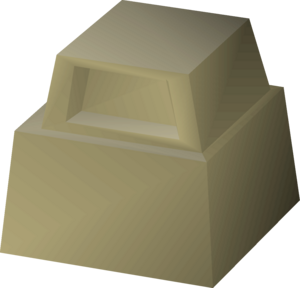 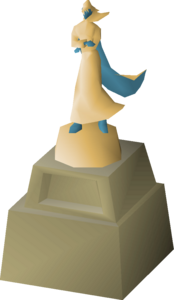 The Elidinis Statuette (also known as the Shrine to Elidinis or the Shrine to She) is a shrine in Nardah slightly north of the city's fountain worshipping the goddess of growth and fertility, Elidinis. The shrine was the focus of town worship where the "Priestess of She" would lead the worship.

However, the priestess spot has been vacant in the shrine for the last five years. This lead some people to suspect that the goddess in her anger dried up Nardah's water supply. Currently, Shiratti the Custodian maintains the shrine. An ancestral key can be found on a table to the east of the building, which is used during the Spirits of the Elid quest as well as a torn robe in the cupboard to the west of the building also used in the quest.

After completing the quest, players can pray at the Elidinis Statuette, which will restore their hitpoints, special attack energy, run energy, prayer points, cure poison and give a temporary +7 Hitpoints boost.

Players who have completed the Elite Desert Diary can take advantage of the desert amulet 4, which provides unlimited Nardah teleports and teleports the player in close proximity of the statue. This saves the player from using up a ring of dueling charge to get to the Clan Wars portal, and is faster.

Pools in a Superior Garden, such as the ornate rejuvenation pool, which functions similarly to the statuette (restoring reduced stats but not giving a hitpoints boost), can be used much quicker than the Elidinis Statuette upon teleporting to a player-owned house, depending on the player's room arrangements. However, players who have the desert amulet 4 can use its Nardah teleport which takes them near the Statuette, making it the superior option if players have completed the Desert Diary.