From Old School RuneScape Wiki
(Redirected from Elnock's Exchange)
Jump to: navigation, search
The RuneScape Wiki also has an article on: rsw:Impetuous Impulses

Impetuous Impulses is a safe minigame based around the Hunter skill. In the minigame, players capture implings which are flying imp-like creatures that can be caught to obtain trinkets and treasures that they have been stealing from all over Gielinor. This takes place in an area called Puro-Puro.

Even though it is a safe minigame, players who die in Puro-Puro will lose all but their most valuable items. This will only apply to players that have been poisoned, envenomed, or are in a PvP world, as there is nothing in Puro-Puro that can kill players.

Completion of Lost City is needed in order to access Zanaris. Having partial completion of Fairytale II - Cure a Queen is recommended to access fairy rings.

A player will need at least level 17 Hunter to enter the minigame area as well as catch the lowest tiered impling. Higher Hunter levels will be needed to catch higher tiered implings.

Having a high Strength level and high Thieving level are also recommended.

Having a high Magic level can be beneficial since players can cast entangle and other snare spells on implings.

A butterfly net and impling jars are needed to catch implings. A magic butterfly net gives a higher chance at catching implings than the normal version, and can be obtained by talking to Elnock Inquisitor who is located inside Puro-Puro.

The minigame is located in Puro-Puro. To access Puro-Puro, the player can go through the main crop circle in Zanaris (located in the middle of a wheat field, east of the fairy ring). There are also other crop circles that randomly appear in wheat fields around RuneScape. The location of the crop circle can be found by talking to the wandering impling in Zanaris who roams inside the wheat field.

Once in Puro-Puro, talk to Elnock Inquisitor who will give the player a run down of the game, the maze, and the implings. He will also give a butterfly net, 7 impling jars, and an impling scroll which shows the number of implings of each type that the player has caught.

The Farmer's Affinity bonus allows faster movement through wheat for 30 minutes. The effect this bonus has is to speed up pushing through magical wheat by exactly 3 ticks compared to the normal push time. This means that the fastest push will now take 3 ticks (1.8 seconds), compared to the normal fastest push of 6 ticks (3.6 seconds). The slowest push will now take 7 ticks (4.2 seconds), instead of the normal 10 ticks (6 seconds).

To receive the bonus, players must enter Puro-Puro via a crop circle in a certain wheat field on Gielinor, in which players can check which via the right-click "Check-gates" option on the wandering impling in the Zanaris wheat field. The timer continues to run after leaving Puro-Puro, so it is possible to enter a crop circle to get the bonus, leave, then re-enter via the Zanaris wheat field and benefit from whatever bonus time remains.

A schematic map of the wheat that can wither away (marked red).

The area in which the minigame takes place in is a maze. The walls are made of magical wheat and to travel between different layers of the maze, the player needs to right-click the "Push-through" option. Players will be able to push through the wheat more efficiently with the aforementioned Farmer's Affinity bonus, in addition to a higher Strength level; players can choose to disable receiving Strengh XP via asking Elnock Inquisitor about the wheat.

Parts of the maze's walls will randomly lower and then grow back. This allows the player to run around the maze without needing to push through the wheat. The minimap, due to the magical nature of Puro-Puro, will not display anything.

Capturing an impling requires an empty impling jar in the inventory and a butterfly net or magic butterfly net equipped. Implings inside an impling jar can be looted to receive various items. Different implings carry different items, although higher tier implings will generally carry better rewards. Below is a table of each type of impling and the level required to catch one.

You can use the Bind, Snare, or Entangle spells to freeze an impling's movement making it significantly easier to catch them.

Imp defenders are located throughout the maze and will try to free their captured brethren as they feel some kinship towards the implings. The defenders have a chance at releasing implings inside impling jars that you have in your inventory and knock the jar a few steps away. Having a high Thieving level and imp repellent decreases their chances of freeing an impling. The defenders will free the lowest levelled implings first, so it is recommended to have lower level implings in your inventory so that the defender free those first. If the impling the defender frees is an eclectic or a higher tier, they will despawn.

Players can trade in specific combinations of impling jars to Elnock Inquisitor in exchange for items that are helpful for capturing implings. 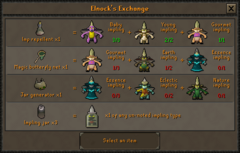 Impetuous 2
The music which plays while standing near a crop circle.