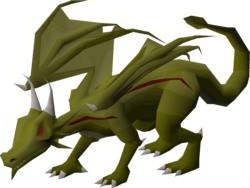 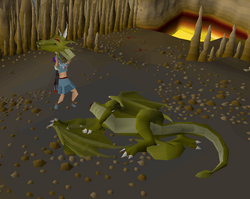 Elvarg is the dragon that players have to kill in the Dragon Slayer I quest. She resides in the dungeon below Crandor. She is a green dragon, and is considerably stronger than the usual kind. Unlike other chromatic dragons, Elvarg has a ranged dragonfire attack. Despite being a dragon, she is not vulnerable to dragonbane weapons.

During the Dragonkin Conflicts, the Dragonkin needed to defend themselves from humans, who refused to distinguish peaceful and aggressive dragonkin. Zorgoth and other unnamed Dragonkin worked on creating dragons with increased aggression. The first of these experiments took place underneath Crandor, where they successfully created a green dragon with heightened aggression: Elvarg. Eventually, she was abandoned by her creators, making her home in the underground system underneath the island. 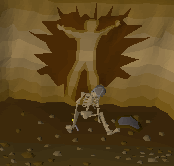 Remains of the original adventurer who woke Elvarg

Elvarg went into a deep slumber, until the year 139 of the Fifth Age when a Crandorian adventurer discovered the cave system and explored the area, eventually stumbling into Elvarg's chamber. The adventurer roused her from her sleep, and she torched them in retaliation before leaving the caverns and torched Crandor completely, its inhabitants not having any sort of dragonfire protection to fight back. Crandorian survivors made a small camp near Rimmington, but Elvarg pursued them and killed most of the survivors, with only three mages able to escape; Melzar, Lozar and Thalzar, each of whom split a map to the island and went their separate ways. The human kingdoms of Misthalin were on high alert, worried she might devastate the continent, but fortunately she returned to her chamber on the island.

During the year 169 of the Fifth Age, an adventurer who entered the Champions' Guild looked for a quest; the Guildmaster told them to speak to Oziach, who in turn told them to slay Elvarg. The adventurer acquired equipment, including an anti-dragon shield from Duke Horacio, and the map from the three mages (two of which had died, while the other went insane), a ship, and a captain who was not intimidated by her reputation. They soon came upon the chamber where Elvarg was, and successfully slew her after a grueling battle, ripping her head off as proof of her demise.

When planning to vanquish Elvarg, see the sections on the Dragon Slayer I page about preparing and tips and strategies.