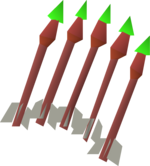 Emerald dragon bolts (e) are emerald dragon bolts that are enchanted via the Enchant Crossbow Bolt (Emerald) spell by a player with level 27 Magic. The spell enchants 10 bolts per cast, and uses 1 cosmic, 1 nature, and 3 air runes.

Enchanted emerald dragon bolts have a 55% (54% against other players) chance of triggering the Magical poison effect. This makes the bolts count as being poisoned (5 poison damage, even higher than super-poisoned projectiles, which have an initial damage of 4). When the ability is activated, a cloud of green gas rises up below the target. The serpentine helm's increased chance of inflicting venom by using poisoned Ranged ammunition does NOT apply when using enchanted emerald dragon bolts.

These are commonly used to range Aviansies to get kill count. They are also common when fighting the Corporeal Beast, to stun the Dark energy core.

If the player has completed the Hard Kandarin Diary, there is a 10% increase of the likelihood that the special effect of an enchanted bolt will occur (even if the Kandarin headgear is not equipped).