The Emir's Arena, also known as the PvP Arena, is a minigame that replaced the Duel Arena. It was soft-launched on 6 July 2022 in order to have players stress-test the core systems used for the minigame, and was fully launched the next week on 13 July.

The minigame gives players an opportunity to fight each other in a controlled environment, where matches take place on an alternative save game world against players of a similar skill level. Players will be able to register their interest in finding a fight; while a match is being prepared, players can continue with whatever they were doing prior.

The Emir's Arena is an ancient complex dating back to the Second Age. It was discovered beneath the sand during the late Fifth Age after which archaeologists of the Varrock Museum excavated it, before turning their attention to the excavation of Saranthium and Senntisten at the Digsite.

Following the excavation the Emir of Al Kharid had it restored to its former glory, with the arena, once again, being used as a fighting ground. This attracted many participants and spectators, and it was not long before the arena turned into a place of gambling. Three officials: Maoma, captain of the Emir's guard, Koriff, the hostess of the arena, and Saika the accountant of the arena, formed the Calamity Coven, where they abused their positions to rig matches, encourage betting and falsify accounts to earn themselves huge amounts of profit. The Coven was eventually found out and was dispelled, although under which circumstances are not known. Following this the Emir gave the place a new start, increased control and heightened security to avoid similar incidents in the future.

Players can only participate in ranked activites within the Emir's Arena on designated worlds, as they use a separate profile from the player's profile in the main game. Players can still challenge others on any world for legacy duels, which work like the Duel Arena used to bar the staking aspect.

Players can find matches via the PvP Arena button in the grouping tab or the arena recruitment board, where they can register for either a 1v1 Tournament or 1v1 Duel where the game decides who they fight against.

Once the match is ready, players will be notified that it’s time to fight, and be prompted to world hop to a designated world, giving players enough time to get to a safe place and hop.

Because fights take place on an alternative save game world, the player's standard game profile is left behind, along with their levels and items. To succeed in the Arena, players should be familiar with player killing mechanics as well as can adapt their playstyle across multiple player killing builds based on what the audience craves the most. The crowds' preferences change on a weekly basis, requiring players to use one of the following builds:

As well as mastering various builds, players will have to select which items to take into battle via the PvP Arena Supplies interface. Players can tailor their equipment and inventory to their liking via the supplies chest inside the Arena's hospital, of which there are nearly 400 items to choose from, including equipment exclusively used for the minigame, such as Calamity armour and wrapped Culinaromancer's gloves.

The Supplies interface can also be accessed whilst preparing for a match on the upper level of the hospital. Players can only use equipment that their assigned account build can wear, so they'll need to know which items work best for whichever build is currently in rotation.

The rotations occur before the weekly game update, which is between Tuesday and Wednesday from midnight to 1 a.m. (dependent on the current time standard in the UK). The rotation will only affect ranked duels; other types of duels may be fought with players' choice of loadout.

The current active build in the rotation is Pure.

Examples of equipment and items for each build: 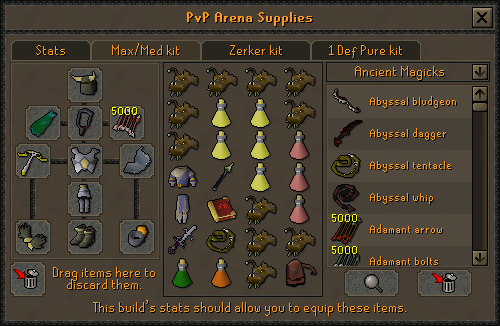 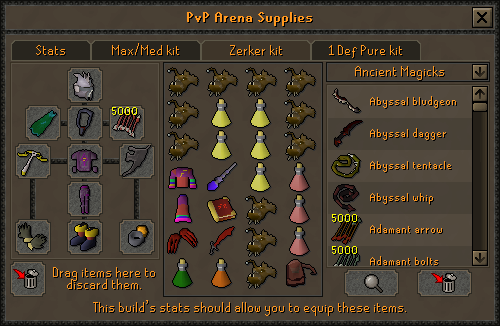 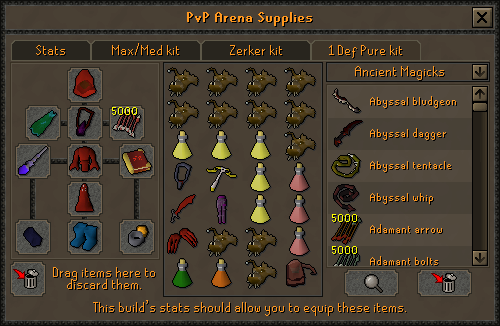 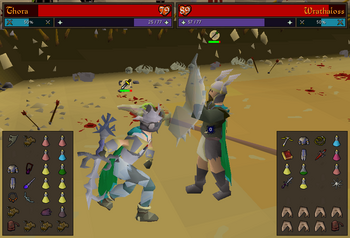 Spectating a duel via the Arena's recruitment boards. Spectators can view the fighter's health, prayer points, special attack energy, and their current inventory by using the nearby telescope, which functions as an oculus orb.

In 1v1 Tournaments, players participate in a series of 1v1 fights in succession. Players can let the game form a tournament group for them, selected from the pool of available participants, or have a go at organising one manually (note that there are no rewards for participating in manually organised events).

To enter a Tournament, simply register interest via the PvP Arena side-panel. Once enough players have signed up, the game will proceed to create a 1v1 Tournament for successful applicants.

Each Tournament consists of anywhere from 4 to 64 players, with each round being split until there are only two participants left! Here's how this might look for a Tournament of 16 players:

Players will receive Rank and Reward Points based on how they placed in the tournament.

1v1 Duels are one-off battles where the game will automatically pits players against an opponent of similar rank.

Just like tournaments, the winner of a ranked 1v1 Battle will receive Rank and Reward Points.

In unranked duels, players can choose who to fight, but there are no rewards for doing so; challenge areas are identified upon entering by a battleaxe (

) which appears in the bottom right hand corner of the interface, during a duel this is changed to a skull (

Players within the arena bounds can engage in safe 1-vs-1 combat in so-called legacy duels. This activity is not restricted to any specific game worlds, and is available even on the free-to-play servers. In order to start a duel in the legacy mode, players have to right-click on the selected opponent and choose the Challenge option.

The gameplay of the legacy mode is similar to the replaced Duel Arena with a few notable differences:

The win and loss counts within the legacy mode are stored separately for each player, and they do not affect the main minigame. The initial values for each player were copied from the original Duel Arena kill and death counts. 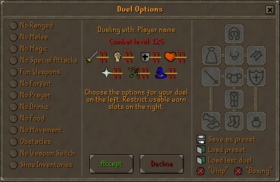 When a player accepts a challenge, it opens up the duelling options screen, which defines the parameters and restrictions for the battle. The screen shows the name, Combat level and combat skills items of the opponent, as well as player's currently worn items. There are 12 different options that can be turned on or off and are adjustable by either player. These are detailed as follows:

It is also possible to select and disable specific equipment slots on this screen by clicking on the worn items section. Rangers should be careful not to check off shield if they intend to use a bow.

Some of the options couldn't be combined; for instance, having no Ranged, Melee, or Magic makes it impossible to fight.

A player can save the duel options and load it as a preset, allowing them to quickly select specific options for their duel.

The 5 different options are: 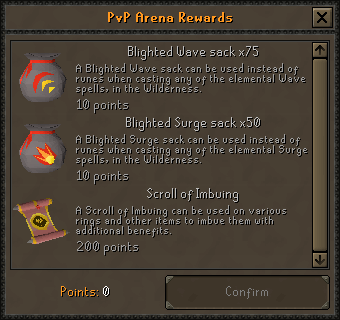 The purchasable rewards for participating in the Emir's PvP Arena.

Upon completing a match, players are returned to where they were upon joining. Winning awards rank points and reward points, and losing will deduct rank points.

At the entrance to the arena, trade Mubariz to purchase PvP Arena Rewards:

During the initial Developer's Blog, some rewards were proposed, but were later scrapped entirely:

Other rewards were polled in the Rewards for Beneath Cursed Sands & PvP Arena poll, which required players to have at least 20 player kills in the Wilderness or PvP worlds, as well as one win from the Last Man Standing minigame.

After the first poll had all its rewards fail despite the restricted nature of the poll, a revised Developer's Blog was released aiming to address player feedback with the proposed rewards. It was then polled in the PvP Arena Rewards v2, with a similar set of restrictions in voting.

The same rewards were polled, except the humble prayers and left-click teleport item. All but the imbue scroll and spell sacks failed the poll. As a compromise, the Calamity armour and wrapped Culinaromancer's gloves, were added in as equipment usable only within the minigame's equipment chests.