From Old School RuneScape Wiki
Jump to: navigation, search
The RuneScape Wiki also has an article on: rsw:Emotes
This article is about is about the selection of performable emotes. For the emote clue scroll solutions, see emote clues. 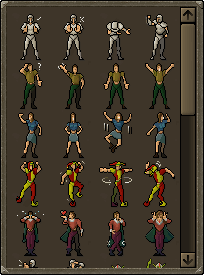 Emotes are a selection of movements that a player can perform. Some emotes are unlocked by default, to be unlocked through random events, quests, the Stronghold of Security, holiday events, or obtaining a skillcape. Emotes are currently the only way one can communicate as a muted player.

Emotes are depicted as characters in the Emotes tab. One character is a man in full white armour with a white medium helmet, another character is a man in a default outfit with brown hair, another character being a woman seemingly wearing a blue dwarf shirt and skirt, one is a jester (as in the Neitiznot jester outfit), Romeo, a cave goblin, a Mime, a woman with a bronze platebody and a dragon plateskirt, a zombie, and a skillcape-wearer.

Emote icons that are bright in colour represent emotes that you have unlocked; either by default, or through the completion of a circumstance. On the other hand, dimmed out emote icons represent the emotes you have yet to unlock. Though the icon itself is obscured showing mostly the black frame, one can still hover over each locked emote to know its name. There are 49 Emote icons in total.

A player performing the Dance emote.

Default emotes are emotes unlocked upon creating an account. Thus, all players readily start off with 23 emotes regardless of gameplay progress.

These 23 emotes comprise of simple animations mainly for communication in complement with the chat system, though they are also used in Treasure Trails as a part of completing a clue scroll. One may use emotes when muted in means of communicating with others.

These emotes are related to certain quests. Quests emotes can be unlocked during a quest. As for now, all quests related to these emotes requires membership to be started. Thus all quest emotes are indirectly members-only.

A player performing the Push up emote.

These emotes are related to random events. Players must be presented with the event itself and complete it to unlock the emotes.

When completing either the Drill Demon, Mime or Gravedigger random event, players can be rewarded the typical costume piece the usual random events offer, or unlock an emote.

These emotes are related to certain achievements in the game. Achievements emotes vary in requirements, conditions and restrictions of method to be unlocked.

The Skill Cape emote is unlocked by default, though is categorised as an achievements emote due to the restriction of skill mastery. Without an eligible cape, the message You need to be wearing a skillcape in order to perform that emote. will appear in the chatbox even though this does not necessarily work with only skillcapes.

A player performing the Stamp emote.

These emotes are related to the Stronghold of Security. Player security emotes are unlocked level intervals of the dungeon from the central chest.

These emotes are related to holiday events. Holiday events emotes are unlocked upon completion of a seasonal event of a particular year, and are unique to the events as they cannot be unlocked by any other means.

All previous holiday events emotes will be unlocked given that the player completed the event on that particular year.

Penguin emotes were first encountered during the Cold War quest in which a sequence was used to convince the penguin at Ardougne Zoo. After the quests, players may reaccess the emotes by wearing the suit via Larry as many times as pleased.

Emotes in this category are emotes that are unlocked via other means.