From Old School RuneScape Wiki
Jump to navigation Jump to search
The RuneScape Wiki also has an article on: rsw:Enakhra
Enakhra? (edit)

According to legend, she showed her temple to Zamorak, but he spurned her, claiming that he would rather have a weapon that could kill a god than a temple. Following this, Enakhra dwelt in her temple for thousands of years and did not come out, though the last that the humans in the surrounding area learned was that she was 'thinking of ending her rivalry with Akthanakos.' In actuality, Enakhra tricked Akthanakos and led him into her temple, where she cursed him and turned him into a Boneguard, a living skeleton to guard her in her solitude.

In the late Fourth Age, an expedition of knights from Avarrocka was sent into the desert to, for unknown reasons, destroy Enakhra. The expedition was a disaster and all of the knights were killed by the bitter Enakhra's magic, with the exception of one, Pentyn, who was doomed to be trapped in an ancient spell that preserved his life, but kept him cold, miserable and diseased.

In 169 of the Fifth Age, taking place during the quest Enakhra's Lament, a Zamorakian mage named Lazim delved into the desert where he knew the temple to be and enlisted the help of an adventurer to uncover it. The adventurer was then able to free Akthanakos and he and Enakhra vowed to continue their long, drawn-out rivalry in The North. 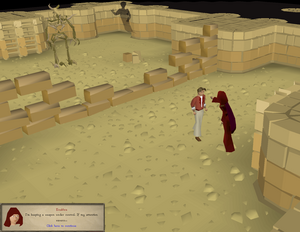