Enakhra's Lament is a quest which takes place in an old temple beneath the Kharidian Desert. It is the first quest to feature the Mahjarrat Akthanakos and Enakhra.

Note: Have at least four free inventory spaces at the start of the quest.

You can start this quest by speaking with Lazim, who is located just south of the Bandit Camp and west of the Jaldraocht Pyramid (the pyramid involved in Desert Treasure). Fastest way to get there is by taking a carpet ride to Bedabin Camp and running south or through the fairy ring code biq and running southwest. Alternatively, if you have a Pharaoh's Sceptre you can teleport to Jaldraocht (Azzanadra's Pyramid) and run west.

First, you need 32 kilograms of sandstone. There is a sandstone mine next to Lazim that you can use. At a higher Mining level, you'll get bigger blocks. There are four sizes: 1 kg, 2 kg, 5 kg, and 10 kg. You can use your chisel on big blocks to make them smaller.

Speak to Lazim and tell him you have the sandstone. You will have to give them to him one by one. 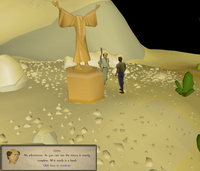 The statue needs a head.

After you've given Lazim exactly 32 kg, he will attach them with magic to make a 32kg sandstone block. Use your chisel on the block that he gives you to make a sandstone base. Talk to him again, and then use it on the flat ground next to him.

You now need 20 kilograms of sandstone for the body. After you've given him the required amount and he gives you the 20kg sandstone block, use your chisel on it to make a sandstone body, and then attach it to the base. Use your chisel on the statue to refine it and talk to Lazim again. 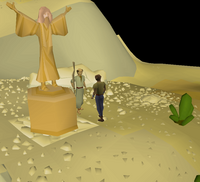 You now have to choose the head of the statue. You may choose between either of the two god's heads and Lazim's head. The outcome will always be the same. Mine two 5 kg pieces of granite, not sandstone! Chisel one of the 5 kg pieces into a head, and keep the other in your inventory for later in the quest. If you planned on obtaining soft clay during the quest, mine some clay now as well. There is a general store at Bandit Camp where you can buy a bucket of water to use on the clay to make it soft clay. Also mine a piece of coal if don't have one already, as you will need it later. 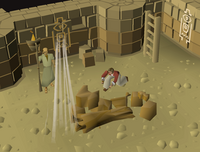 Go around the outside track to each of the rooms through the doors. Watch the cutscenes of Enakhra (a Zamorakian Mahjarrat) and take the Z sigil, R sigil and K sigil, which together with the M sigil make up the consonants of 'Zamorak'. You may also want to climb the ladders and sandpiles to unlock all four secret entrances. After you've unlocked all of the outer doors with the four limbs, go towards the middle and use the sigil to unlock the door.

Go up the ladder. There is a pedestal in the room you are in. Use your soft clay on the pedestal to make a camel mould (p) and then use the chisel on the remaining piece of medium-sized granite (5 kg) to make a new stone head. Place this granite camel head into the pedestal to be greeted by another cut scene.

If you did not bring soft clay, regular clay can be mined in the quarry. There is a general store to the north where you can purchase a bucket of water and use it on the clay to make soft clay.

(Optional: Use a second wet clay on the granite head on the pedestal to make a camel mask for yourself, but only after you've crafted and placed in the new stone head!!)

There are four globes that you must light before you proceed north, based on the four classes of the Ancient Magic spells.

Take the north-west corridor and talk to the frozen knight. Give him your loaf of bread or cake or pie. Note: right click and use it on him, do not left click to eat. He'll still be stuck, but will no longer be in hunger.

Take the south-west corridor and cast your Fire Bolt, Blast or Wave on the frozen fountain to thaw it.

Take the south-east corridor and light all six braziers. Investigate each one to see which item to light. The items are: logs, oak logs, willow logs, maple logs, a candle, and coal.

Warning: Standing too long in this room without lighting any braziers will do damage!

Take the north-east corridor and use an air spell (Wind Bolt, Blast or Wave) on the furnace to clear out the room.

Climb down the ladder. You'll see another boneguard. This time, turn on Protect from Melee, and talk to it. It will try to attack you a couple of times—then, it will be impressed. It will tell you that it was put under Enakhra's control. Agree to seal her in her temple by building a wall.

The Mahjarrat head to the North.

Take three pieces of sandstone from the pile of bricks, use the sandstone on the wall, and then use your chisel on the wall to trim it. Once you've built the wall, talk to the boneguard. The boneguard will reveal himself to be another Mahjarrat, Akthanakos. He follows Zaros and is Enakhra's archrival.

Enakhra will destroy your wall, and both individuals transform into their true form, the Mahjarrat. They will then teleport away to have their final battle in the North. 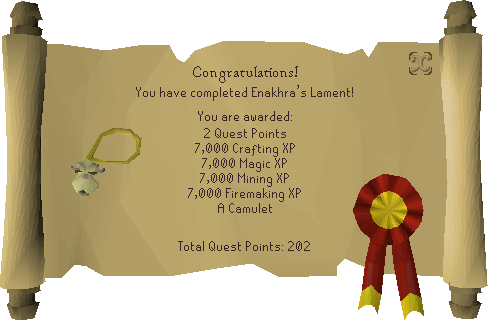 Completion of Enakhra's Lament is required for the following: