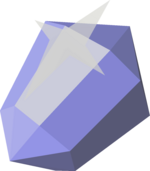 The enchanted gem is an item used in the Slayer skill. They are sold by all Slayer Masters for one coin. These allow a player to contact the Slayer Master that has assigned them their current Slayer task, where they can ask for tips, ask who the master is and where they are located, and check how many monsters they still have left to kill for their task. However, it will not allow players to ask Slayer masters for new Slayer tasks.

The enchanted gem also has a right-click option to bring up a log recording every Slayer monster the player has killed. Once a player reaches 65,535 kills for a particular monster, the log will say "Lots!" for that monster's entry. 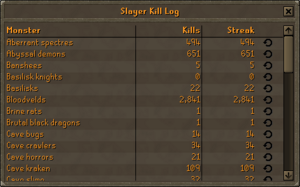 The enchanted gem is a component of the commorb obtained from Sir Tiffy Cashien during the Wanted! quest.