From Old School RuneScape Wiki
Jump to navigation Jump to search
The RuneScape Wiki also has an article on: rsw:Enlightened Journey

Enlightened Journey is a quest in which you help the Entrana monk Auguste set up a hot air balloon transportation system. 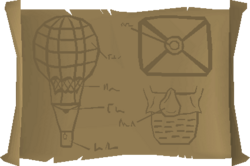 It is recommended to read ahead and bring the appropriate items to minimise the number of bank runs. Note that secateurs, rakes and spades can also be obtained from a Tool Leprechaun if placed there before, but as you'll be waiting several hours, it's not practical to bring the tools to the island with you.

The recommended run is:

To start the quest, travel to Entrana and speak to Auguste, who is on the west side of the island, just north of the Herblore shop. Remember that weapons/armour are not allowed on the island.

Auguste wants to make two test balloons and asks the player to get him the following items: 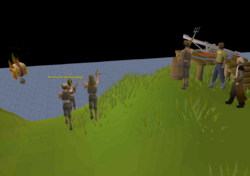 An angry mob destroys the balloon.

Talk to Auguste to see a short cutscene of the balloon launch. After that, talk to him again, and he will take the remaining two pieces of papyrus and the sack of potatoes from you. In a second cutscene, the player launches the next balloon, which is attacked by an angry mob of peasants.

Next, Auguste asks the player to get the materials for a real balloon:

You can skip the following paragraph if you already have willow branches in your bank. After you bring these items (21 in total) to Auguste, he will need to you attach willow branches to the platform. Auguste will give the player a basket of apples and an "Auguste's sapling", which is actually a willow sapling. Plant the sapling in any tree patch and ask the local farmer to look after the growing tree by paying with a basket of apples. Once it is fully grown, check its health, wait a half hour, then cut willow branches from it by using secateurs on the tree. You can only get 6 branches at once, so you'll need to wait another half hour to get all 12. To save time, you can buy the willow branches from the Grand Exchange.

Ten normal logs (other log types will not work) and a tinderbox are needed for completing the journey. Because axes can be wielded as a weapon, they are not allowed on Entrana. Logs should be prepared before going to Entrana.

After giving the materials to Auguste, weaving the basket and having the logs and tinderbox in the inventory, speak to Auguste to get ready to fly. He'll describe some of what the player should notice and some tips on how to fly the balloon.

An interface to control the balloon will appear. Maneuvre through the obstacle course without hitting anything (including birds, trees, houses and clouds) and safely land on the well marked landing spot on the third screen. 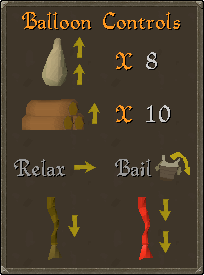 Clicking any control advances the balloon one "space" to the right.

The numbers at the side of sack and log buttons correspond to how many times player can use the resources respectively; therefore, fuel is limited. If the player runs out of fuel, they can still "relax" or lower altitude (by pulling ropes).

A tip is that how the balloon appears to travel is not as important as where it will end up. If the balloon meets a cloud right above it and a bird in front of it, it is possible to go right through both obstacles by dropping sacks or pulling the red rope (raising and dropping the balloon by 2 spaces respectively). The balloon will fly high or low enough to avoid the bird, and will advance one space forward to avoid the cloud. It might not seem like the balloon can fit through, but it can.

When ready to fly, three screens showing the path to Taverley will appear in the ballooning interface. Go here for more pictures.

There are various ways to control the balloon, and the following is just one of the suggested paths:

After the balloon has landed, talk to Auguste for a little dialogue - then, the quest is finished. 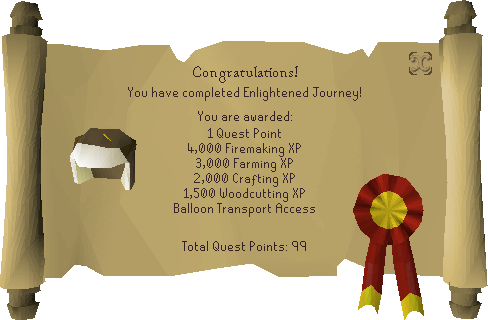 Completion of Enlightened Journey is required for the following: