Enormous Tentacles attack with Magic, using their Ranged level and roll against the player's Magic defence. Although their max hit is 2, their attacks are extremely accurate and add up over time. Their projectiles resemble Water Wave. 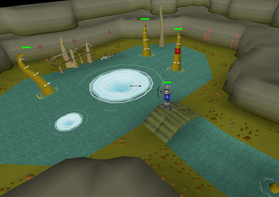 Players must disturb the four smaller whirlpools before they can successfully release the Kraken.
Retrieved from ‘https://oldschool.runescape.wiki/w/Enormous_Tentacle?oldid=14182305’
Categories:
Hidden category: