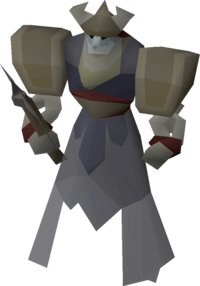 The enraged barbarian spirit is a level 166 spirit that can be found in the Ancient Cavern. They are along with many other high-levelled monsters, including mithril dragons and waterfiends. They are capable of large amounts of damage, with 18 being their highest hit, but they have low accuracy. Protect from Melee can be used to completely avoid damage.

These are a common option for an ironman account to get the yew shortbow.

These monsters are not considered to be undead (as indicated when trying to cast Crumble Undead on them), so a salve amulet or salve amulet (e) will not help at all.

The average Enraged barbarian spirit kill is worth 600.44.