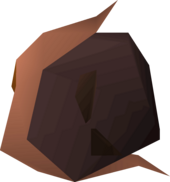 An ensouled tzhaar head is an item which can be dropped by TzHaar-Ket. It is used to gain Prayer experience by using the level 72 Magic spell Expert Reanimation from the Arceuus spellbook reviving a TzHaar with 35 hp when used on the death location, granting 1,104 Prayer experience after killed. Killing the reanimated TzHaar will also grant 0.3% Arceuus favour.

Ensouled heads can be reanimated anywhere as long as the head is on the ground within the 31x31 area centred on its initial drop location and has not been put into the bank, trade screen, Grand Exchange, or price checker.[1][2] Otherwise, it must be taken to the Dark Altar in Arceuus to be reanimated.