Ents are monsters found in the dungeon beneath the Woodcutting Guild and in the forests north and east of the Chaos Temple. Ents are found on members' worlds exclusively.

Upon death, their remains can be chopped to give several sets of noted logs according to the player's Woodcutting level. Players also have a chance to receive a bird nest while chopping the ent trunk. While cutting the trunk, players get 25 experience per set of logs received no matter the type. Completing the medium Wilderness Diary increases the chance of successfully chopping ents in the Wilderness by 15%.[1] Ents can be safespotted by moving 1-3 tiles adjacent to a tree and using a ranged weapon, halberd, or magic attack.

Players get better kinds of logs when using a rune or dragon axe. In addition, it was observed that, even when stat boosts and dragon axes are used, ents do not drop yew logs at or below level 60 Woodcutting; only at 61+ Woodcutting (unboosted) are yews very commonly chopped.

While Ents do drop slayer's enchantments, while on a wilderness slayer task, they do not drop looting bags or Larran's keys.[2] 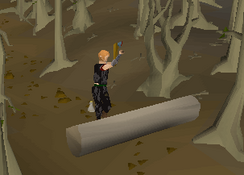 A player chops an Ent trunk after killing an Ent.

Ents in the Wilderness will give twice as many logs as those in the Woodcutting Guild. Regular logs are not dropped once you reach 50 Woodcutting.