The holy island of Entrana lies south-west of Taverley. When entering Entrana, adventurers are prohibited from bringing weapons or armour with them.

Taking a boat from Port Sarim to Entrana is a task in the Falador Easy Diary.

Generally, players cannot take any of the following:

Players cannot smuggle weapons or armour to Entrana by opening Treasure Trails caskets there, as they cannot be received on the island; if a slot in the reward casket loot table rolls a weapon or armour, it is rerolled. This makes it useful for players seeking specific rewards such as god pages.[1] However, beginner and master caskets may not be opened on the island; if attempted, a message states that the monks are watching closely.

Certain items can be crafted on the island with the appropriate Crafting and/or Fletching levels. However, the player should only do this in their current session; if they log off and back on after having created a weapon, the monk will spot the player and remove them from the premises immediately.

In the Trailblazer League game mode, players could smuggle black and blessed bracers, chaps and body armour to Entrana without objection from a passing monk by exiting the Law Altar, without having to craft a set of black dragonhide armour. This required crystal of memories to return to the Law Altar with armour. It is unclear whether this works in Deadman Mode with sigil of last recall.

Implings caught in jars be smuggled via the Law Altar with a Crystal of memories to Entrana, but jars with prohibited equipment cannot be opened on the main island, attempting to yields the message: You can't loot impling jars here. However, they can be looted inside the Law Altar despite the power of Saradomin prohibiting taking prohibited implings caught in jars through the law rift. It is unclear whether impling jars can be smuggled with a Sigil of last recall.

The Entrana Dungeon is located in the north-west of the island. It is the location of the dramen tree.

Located north-west of the port, the player can find a furnace. It is rarely used for Smithing due to the lack of rocks and Entrana's distance to a bank. However, you can find Fritz the Glassblower, who is also the Glassblowing tutor. He buys molten glass from players for 20 coins each.

All ingredients for glassblowing are found here (sand, soda ash, and a furnace), including a glassblowing pipe. You can find a spawn in the house north-east of the Herblore shop. There are 10 seaweed spawns on the north-western side of the island, but you need to use the Telekinetic Grab spell to reach two of them.

It is possible to quickly accumulate buckets of sand by taking empty buckets from the Tool Leprechaun next to the hops patch, filling them in the sand pit and depositing them to the Bank Deposit Box in Port Sarim next to the Monks of Entrana.

There is a hops patch for the Farming skill. As usual, a tool leprechaun can be found near the patch. The player can pay Francis, and he will watch your crops for you. He also sells the following items: 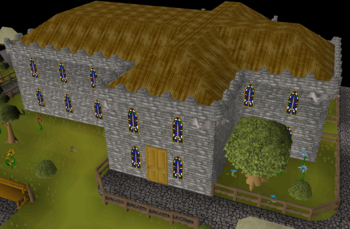 The seat of the High Priest of Entrana.

Held by the High Priest, the Saradomin church is the most important building of all Entrana. If you are injured, talk to a level 5 monk and select the option "Can you heal me? I'm injured" and he will nurse you for free. From the candle stall, you can steal candles, granting 20 Thieving experience. You may fail, giving the message "A high power smites you" and inflicting 1 damage. Upstairs, the player can find an organ on which they can play a melody.

With the Treasure Trails expansion on 6 July 2016, a master clue scroll may direct the player to stand in the church and cheer while wearing a full set of black dragonhide armour. Since armour (usually) cannot be taken onto the island, the player must have 84 Crafting (boostable) and bring a needle and enough thread and black dragon leather (6) to make the armour themselves in order to complete this clue. A STASH unit is provided on the north side of the church for the player to store the armour for this clue.

Frincos's Fabulous Herb Store, a Herblore shops owned by Frincos, can be found on the western side of the island.

Francos sells 50 empty vials at 2 coins each. However, there are two vial spawns in the shop.

The Law Altar can be found on the north-eastern side of the island.

A huge Fishing dock is located on the east side of the island. There are four fishing spots, all of which are sea bait fishing and small fishing net locations. Note that there is also a fly-fishing location located on the river. The spots are on both sides of the river directly behind the church. A fishing rod spawns in the house right before the dock, and there is a chicken farm for feathers north of the dock. There is also a range nearby for Cooking. Players can bank their fish at the bank deposit box at the Port Sarim dock.

Despite not having a bank, a Poll Booth can be found in a house on the western side of the island.

The following are found in the Entrana Dungeon:

Searching the southern drawer in the house with the cooking range on the western side of the island is the solution to a hard cryptic clue: When no weapons are at hand, then is the time to reflect. In Saradomin's name, redemption draws closer...

Cheering in the church is an emote for a Master clue step, requiring black dragonhide body, chaps and vambraces which must be crafted on Entrana: Cheer in the Entrana church, beware of double agents! Equip a set of full black dragonhide armour.