From Old School RuneScape Wiki
Jump to: navigation, search
This article is about the duck named Erin. For the human named Erin, see Silver merchant.
Erin 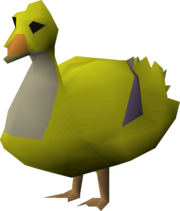 Erin was a yellow duck who resided in Falador Park. When you got close to it, it would follow you. The duck was added in a hidden update and was removed a week after its release due to a generally negative response from player base.

Snowballs could be used on the duck, giving the message "The duck absorbs the snowball." If enough snowballs were used on the duck by nearby players, a snowman would briefly appear and say "So you wanna build a snowmannnng!" before disappearing. The snowman wore a frog mask, and its examine text was "Really wants to be built."

When the duck was released it was widely seen as a case of Jagex displaying favouritism to certain players. This is because the duck was named after Saber Six (Erin), an Old School RuneScape streamer on the popular gameplay streaming website Twitch. Mod Reach came under the most heavy criticism as he implemented the update.

Many players were also concerned that, unlike most content updates in Old School RuneScape, this addition was not added to a poll to be voted on by the community before being added to the game.

Mod Reach posted a thread on Reddit's Old School RuneScape subreddit regarding the issue, and formally apologised for the incident[1]: