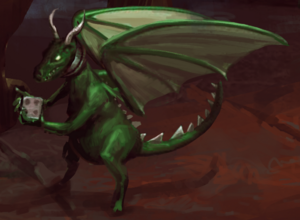 Eski as depicted on the remastered "Warrior and Skeleton" wallpaper from 2018.

Eski is a small pet green dragon owned by Tim and Crunchy, typically seen holding or nearby a dice block. They first appeared beneath the table Tim and Crunchy are sitting at in the "Warrior and Skeleton" wallpaper, which also appeared on the cover of RuneScape- The Official Handbook, although Eski is mostly out of frame on the book. In this appearance, they are depicted holding a dice block and wearing a collar connected to a leash held by Tim. 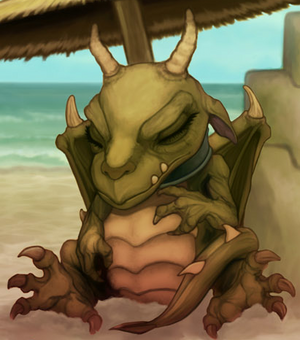 Eski's redesign from the 14th Postbag from the Hedge and "Wish You Were Here" wallpaper.

They subsequently appeared and were named in the 14th issue of Postbag from the Hedge[1], where they are described as sitting under the table drooling on Postie Pete's mail bag before Crunchy's left hand falls off, which they then run off with. The postbag also contained a postcard that depicted Eski relaxing at a beach alongside Tim and Crunchy, which was also released as the "Wish You Were Here" wallpaper. In the postcard and wallpaper, Eski was depicted snoozing under a parasol near a sandcastle, with their dice block nearby, and was also redesigned to more closely resemble the current appearance of baby dragons.

After a long absence, they reappeared in a remastered version of the "Warrior and Skeleton" wallpaper released alongside Old School RuneScape's fifth birthday, reverted to their original design and depicted very similarily to how they were in the original, although they are no longer leashed and have shifted to the right. This version has appeared on the RuneScape website's login screen, and was released as a physical art print with the deluxe edition of the RuneScape - The First 20 Years art book.

During the 2018 Birthday event, the dunce from the Surprise Exam random event was painted green and took the place of Eski in the museum display recreating the "Warrior and Skeleton" wallpaper beneath Falador Party Room.