The Kingdom of Etceteria is the eastern island of a series of two islands making up Miscellania.

The island kingdom is ruled by Queen Sigrid, who was at war with King Vargas of the Kingdom of Miscellenia for 100 years prior to the player intervening in their politics. After the events of Throne of Miscellania, peace was established between the two monarchs. Immediately after, tensions rose again primarily due to the meddling of Fremennik kids, which were found out about and resolved by the player during the events of Royal Trouble.

There is a bank north-east of the island.

The stalls Island Greengrocer and Etceteria Fish can be found in the courtyard of Etceteria castle, which sell a variety of fishing gear, raw sardines and common vegetables.

There is a bush patch to the south-west of the island and a spirit tree patch to the south-east, both operating like any other patch of its type would throughout Gielinor, the former being one of the only ways the player can obtain resources on their own on the island. There are nearby vegetable and flower patches, but these are only used in kingdom management; players cannot grow or collect their own crops from them.

There is an entrance to the Miscellania and Etceteria Dungeon behind the castle, close to the Spirit tree patch. This side of the dungeon is occupied by many sea snake hatchlings and sea snake youngs.

Once the quest Royal Trouble has been completed, the Kingdom of Etceteria also begins working for the player. 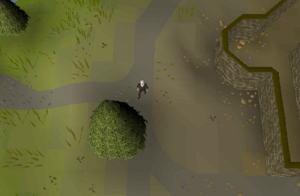 The spot to dig for the clue.