The Evil Chicken is a magical high-level chicken found in the Champions' Guild chicken coop. While fighting the Evil Chicken, players will suffer drastically reduced experience gain, at a rate of only 2.5% the norm, meaning they may not necessarily gain experience on each consecutive successful hit. The chicken respawns at a fixed rate.

The evil chicken was first introduced as a random event that would spawn and attack the player as an anti-botting measure. This was removed in a 2014 update along with the other aggressive random events.

The Evil Chicken is a megalomaniac and filled with a deep seated hatred for his fellow chickens and especially humans, his former captors. He also appears to be insane, given the many contradicting motivations he claims to have. In one case, he claims that the primary motivation for becoming evil and powerful was his hatred of chicken feed. He instead prefers roasted chicken, which he claims keeps his feathers shiny and clean.[1] Later, he claims that his motivation for becoming evil was to avenge all the chickens killed by adventurers, despite apparently killing and eating them himself.[2] 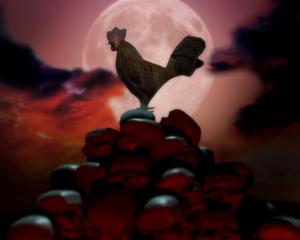 A depiction of the evil chicken atop a pile of skulls.

The Evil Chicken's origins are unclear. One theory, presented in the book on chickens, states that the Evil Chicken started out as a chicken of above-average intelligence. He became aware that he and his brethren were prisoners of the humans and then organised the chickens and rebelled against their captors; however, all the chickens were slaughtered with ease. The chicken blamed his kin for the coup's failure and swore revenge on all chickens and humans. A differing account was presented by a chicken in the Postbag from the Hedge, who described the Evil Chicken as tormented and isolated in his pen and desperate to escape. He trained himself using logs as dummies and one day he hopped over the gate to freedom.[3]

Another theory, also from the Book on chickens, says that he was created in the Second Age by a mage who was attempting to summon a demon and bind it to his will. The mage's spell failed and instead of a demon, he summoned a chicken. The mage grew angry at his failure and banished the chicken to the Abyss. The chicken managed to survive and grew in power. Years later, the same mage attempted to summon another creature, but instead the chicken appeared again. The legend does not say what happened to the mage, but it strongly implied that the Evil Chicken killed him out of revenge. As the Evil Chicken is only 36 years old, this is likely just a legend.

Apparently he once approached the Champions' Guild's guildmaster in disguise with a bag of chickens, offering handsome payment in feathers and cooked chicken to set up a 'champion chicken training arena' in the guild.[4]

Before the random event update in 2014, Evil Chicken would immediately start attacking players upon arriving, using a Magic-based attack which is low-hitting but extremely accurate and rapid. This made him very dangerous for players who are low on Hitpoints or unattentive. Players were forced to either fight and kill the chicken or run away from it. If you managed to kill him, he dropped between 32-750 feathers, raw chicken, and bones.

The Evil Chicken could not be attacked by anyone besides the player to whom he appeared. If the player took too long to kill him, or if they were in range but not attackable (such as if they are in a different room), the Evil Chicken would get bored and leave. The chicken could not move from the spot in which he has appeared, so if a player stepped on top of him, instead of moving to the side as other monsters will, he would shout "Get off of me!," and use a special attack which will push the player aside.

The Evil Chicken's combat stats used to vary depending on the player's combat level.