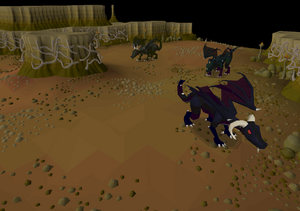 The Evil Chicken's Lair is entered through a teleport by using a raw chicken on the Chicken Shrine north of where entering the Zanaris Hut with a Dramen staff equipped takes you (an undead raw chicken will not work).

It is accessible during and after the Recipe for Disaster: Sir Amik Varze subquest during which players must kill the Evil Chicken. Players should note that to access the Evil Chicken's Lair, they must have spoken to the Wise Old Man in Draynor Village.

Four level 227 black dragons live here on the main level, making the lair an ideal location for Slayer tasks, due to the proximity of the Zanaris bank. Before entering, players are suggested to wield an Anti-dragon shield and turn on the Protect from Melee prayer, as the black dragons are close to the portal and will attack on entry. A ring of life may be useful, just in case the player almost dies. A cannon can be placed in the lair. SAFESPOTS: 1. The eastern tunnel to the mine can be used as a safespot, 2. the south-west corner of the middle pillar once the dragons become non-aggressive.

A level 83 baby black dragon can be found down a level and is reached by using a rope on the tunnel entrance near the middle of the west wall, and then climbing down the rope. The rope will last for a few minutes, then disappear, requiring the player to bring a rope every trip.