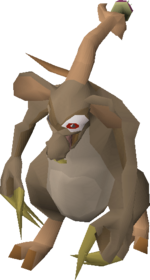 Experiment No.2 is found in the manhole near the Witch's house during and after the Grim Tales quest. This monster has both a melee and ranged attack, although it will only use one style depending on your distance from it.

If using its ranged attack, it will occasionally leave shrunk ogleroots under the players, much like how players using ranged may occasionally have their ammunition left under their target.

Drop rates estimated based on 3,098 kills from the Drop Rate Project, unless otherwise cited.

There is a 6/128 chance of rolling the gem drop table.