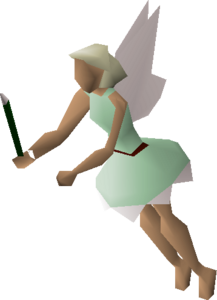 The Fairies are a small race of winged humanoids that occupy Zanaris, along with the mindslayers and otherworldly beings. Although they resemble small humans, they are not too dissimilar from bugs, with their quick beating wings, antennae and wide eyes.

The Fairies often travel to the world of Gielinor, being in charge of maintaining the world's weather, the growth of crops, and the passing of seasons. They operate from Gielinor's moon, Zanaris, and are co-ordinated jobs by the Co-ordinator. According to Chaeldar, the majority of Fairies are Guthixian, but there are exceptions.

The Fairies have lived in Zanaris for a long time, since before Guthix arrived, although they are not native to it. It has been described as 'the nexus of all planes' by the Co-ordinator and Fairy Godfather. When the fairies arrived, they found Zanaris to be a place with many dormant magical properties, such as those of the ability to jump between planes using a powerful portal that had been sealed for centuries. The Fairy Queen harnessed the magic of this portal, and used it to create the network of fairy rings. The god of balance, Guthix, later travelled to Zanaris while searching for a world in the First Age, and upon finding Gielinor, he used Zanaris to bring peaceful races to Gielinor.

Fairies appear to live in the air and fly around frequently. They rely heavily on magic and delight in mischief. Fairies are mysterious to outsiders, who know little of their culture and history. Indeed, many of the other mortal races would happily deny the existence of this tiny race, as most believe fairies are imaginary creatures. The Fairies also seem to be a female-dominated race.

The fairies are involved with the following quests;