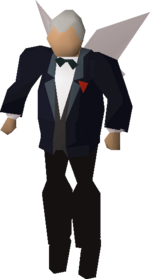 The Fairy Godfather is the ruler of Zanaris while the Fairy Queen is absent and is located in the throne room by Chaeldar. He is also the leader of the Fairy Mafia, serving as the main antagonist of the Fairy Tale series. He is trying to replace the fairies with orks and the fairy queen with himself. He has two henchmen, Slim Louie and Fat Rocco. He is part of the quests Fairytale I - Growing Pains and Fairytale II - Cure a Queen. During Fairytale II, he gives you permission to use the fairy rings.

A successful pickpocket attempt will gain the following loot during Fairytale II - Cure a Queen:

Fairy Godfather is the solution to the hard cipher clue: HCKTA IQFHCVJGT. He will require the player to solve a challenge scroll asking the question: There are 3 inputs and 4 letters on each ring. How many total individual fairy codes are possible? The answer is 64.