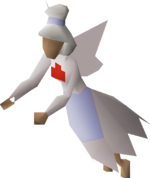 Fairy Nuff is a fairy physician in Zanaris, found in her house north of the bank. She graduated from PoxStead College over 200 years ago and apparently studied advanced healing under Dr Foster while there. Her job is to take care of sick and wounded fairies in Zanaris, although, as they are a magical race and don't get hurt very often, she claims to often not have much to do.

She is involved in Fairytale I - Growing Pains and Fairytale II - Cure a Queen, and after a certain point during Fairytale II, she moves to the Fairy Resistance Hideout. During the former quest, she is busy trying to figure out what is wrong with the Fairy Queen, who is extremely ill after a battle with a large Tanglefoot. She put the Queen under a spell to slow down the passage of time and sent an adventurer in the Fairy Godfather's service to her acquaintance Zandar Horfyre with a list of symptoms in order to find out what was wrong with her. After the adventurer returned with the Queen's secateurs containing her life essence, Fairy Nuff sent them back to the Godfather.

Following this, Fairy Nuff approached the Godfather to reclaim the secateurs so that she could heal the Queen, which he refused. Noticing that many fairies had gone missing, she asked him about this, to which he responded that they were away working and threatened that his henchmen would rip off her wings. She therefore moved the Queen to the secret hideout as a precaution, finding her home completely ransacked upon return. She hid an encrypted note on the back of her medical certificate for the adventurer to find and fled to the hideout with other fairies that had been attacked by the Godfather. There, she learnt that the Godfather was intent on ruling Zanaris and had enlisted an army of orks to his service. She and Fairy Very Wise instructed the adventurer to steal back the secateurs from the Godfather, but these did not cure the Queen. She then had them gather the ingredients for a brew a magic essence potion to cure the Queen's magical poison, which indeed awoke the Queen. From her story, Fairy Very Wise deduced that the Godfather had been the one to attack her rather than the Tanglefoot, and the fairy resistance is now planning on defeating the Godfather whilst Fairy Nuff treats the fairies still injured.

Prior to starting Fairytale I, she will offer to heal some of the player's hitpoints in exchange for cut gems.