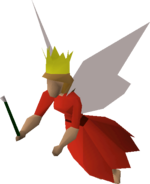 The Fairy Queen is the ruler of Zanaris and the fairies, and she plays a key role in the Fairy Tale quest series.

In Fairytale I - Growing Pains the Fairy Godfather has stolen the Queen's secateurs. Players must save the Queen by returning her secateurs which Tanglefoot (a level 111 tree-like monster) drops.

In the sequel to Fairytale Part 1, Fairytale II - Cure a Queen, players do more research to find out how to cure the Queen. She is still sick and unable to move, so players do some snooping around Zanaris and find some glyphs on the back of a certificate. With the help of inscriptions on the mysterious ruins of the Cosmic Altar, players decipher the code and learn how to gain access to the Queen's quarters. Players must then create a potion to cure her. After all this is done, they gain the ability to use the fairy rings and have their own pair of magic secateurs.

While the Fairy Queen is sick, you cannot talk to her. Only before and after both quests can you speak to her.

To return to the queen, the player must enter the following 4 fairy ring codes: air, dlr, djq, ajs (note that the third code will not transport you anywhere new; simply enter the fourth and final code after the failed teleport to reach the hideout). After a recent update, players who have completed Fairytale II are no longer required to have Nuff's certificate in your inventory.

The queen is surrounded by the fairies that stayed loyal to her, Fairy Nuff, and Fairy Very Wise.

Fairy Queen is the solution to the hard cipher clue: GBJSZ RVFFO. She will give the player a puzzle box to complete. While the queen is incapacitated during Fairytale II she cannot talk to the player, and this clue step is incompletable. Also, even though the queen is located in her throne room before doing the Fairytale quests, she will not acknowledge a player's clue scroll here, and must be talked to in the hideout after completing Fairytale II.