{"requirements":"*Completion of the following quests:\n**[[Lost City]]\n**[[Nature Spirit]]\n***[[The Restless Ghost]]\n***[[Priest in Peril]]\n*The ability to defeat a level 111 [[Tanglefoot]] with limited weaponry","desc":"Recently, farmers around RuneScape have been noticing some trouble with their farming patches. They just don't seem to have the same yields as before. What could be the source of this malady?","difficulty":"Experienced","kills":"[[Tanglefoot]] ''(level 111)''","name":"Fairytale I - Growing Pains","start":"[[Martin the Master Gardener]] in [[Draynor Village]].","length":"Long","ironman":"*Completion of [[Jungle Potion]] (to obtain [[proboscis]] if needed)\n*Ironmen who do not have the necessary [[Herblore]] level to clean possible herbs required to bless the [[secateurs]] will need to visit the [[Zahur|herblore shop]] in [[Nardah]] to clean the grimy herbs.","items":"*[[Secateurs]] (obtainable in the farm shop north-west of the quest giver for 5 gp)\n*A [[spade]] (obtainable multiple times during quest)\n*A [[ghostspeak amulet]]\n*A [[Dramen staff|Dramen]] or [[Lunar staff]]\n*A combination of three items picked for you at random, see [[Fairytale I - Growing Pains#Blessed secateurs|list of potential items]]."}

Talk to Martin the Master Gardener.

Note: Do not pickpocket Martin during the quest, or you won't be able to talk to him for 15 minutes of in-game time.

He's walking around the pig pen north-west of the bank in Draynor Village. You can teleport to Draynor Village using an Amulet of Glory. He'll mention that his roses haven't been doing as well as they used to, and he suspects something's wrong. He wants you to ask the other members of G.A.G. (Group of Advanced Gardeners) if they're having the same problems he's having.

Items required: 5 coins (if you don't have secateurs already), Falador, Lumbridge and Varrock teleport (tablet)s, Combat Bracelet (optional but recommended), dramen staff. (If you plan on using a canoe, bring an axe.)

The locations for the nearest 5 G.A.G. members.

You can choose any of the gardeners near the farming patches (allotments, hops, trees or fruit trees, anywhere you could pay a farmer to watch your crops) around RuneScape. Ask if they are a member of the Group of Advanced Gardeners. The easiest ones to reach are:

(If you use Heskel, Elstan, or Frizzy, you can pick up the spade in the Estate Agent's home behind the door when you pass it if you use the Falador teleport (tablet).)

You need to talk to five of them.

All of them say the same thing. They've been having trouble with poor crops. They all have different explanations of what's wrong, though. However, the last person you ask will have a more interesting explanation. They will suggest maybe the fairies have something to do with it. While it does seem to be a bit fantastical, that would only be if it weren't for the fact that you know a few of them.

Go back to Draynor, and talk to Martin again. After telling him about the different ideas, get your Dramen staff and head south-east to Zanaris.

To enter Zanaris, equip your Dramen staff and open the door on the unmarked house in the centre of Lumbridge Swamp.

Note: If you have not gotten a spade yet, do not wield your dramen staff, and take one from inside the shed before teleporting into Zanaris. 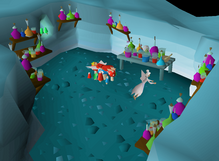 Head to the Fairy Queen's throne room. It's just south of where you enter the city, in the room with the Slayer master, Chaeldar. However, something's wrong. The queen herself is missing. Instead, someone called the "Fairy Godfather" is here. He'll tell you that the queen has fallen to some sort of illness. She's under the care of Fairy Nuff.

To find the queen, head west and go to the room to the north of the bank. Talk to Fairy Nuff, and she'll tell you the details of the queen's illness and give you a list to take to a wizard named Zandar Horfyre.

Items required: Symptoms list, a spade (can be found inside Draynor Manor), Falador teleport (tablet), and a charged amulet of glory (both optional but recommended).

Go to Falador and head west, or to save time use a Skills Necklace teleport to the Crafting Guild and travel north-west to the Dark Wizards' Tower. Be aware that you will need to walk past several level 11-23 dark wizards that can be aggressive. Head up to the top floor and talk to Zandar. He'll take the symptom list and then suggest you talk to Malignius Mortifer.

The grave where you will find the skull

He can be found east of the Crafting Guild and directly south of Falador, along with a few elemental wizards. Talk to him, and he'll tell you he could probably help, but he wants something from you first. He wants a Draynor skull from a grave near Draynor Manor. Go to the manor and around to the back (north side, inside the fencing). Dig up the grave there. If you need a spade, there is one that respawns in the manor.

Items required: 3 assigned items (possible items listed below), secateurs, an amulet of ghostspeak and the Ectophial (optional, but saves a lot of time).

Once you have the skull, go back to Malignius, and give it to him. He'll tell you that the queen's problem has to do with a creature called a Tanglefoot. In order to kill it, you need to enchant a pair of secateurs. To do this, Malignius will tell you to take a pair of secateurs and three additional items to the Nature Grotto. The items are randomly chosen from the below list. While most of the items are tradeable, ironman accounts will need to obtain the items from their normal sources.

Note: Be sure to read your quest description to ensure you pick the correct combination before leaving.

When you finally have the items you need, grab your Amulet of Ghostspeak and secateurs and go to the Mort Myre Swamp (you can use the Kharyrll Teleport, your Ectophial and then go west, the Salve graveyard teleport (tablet), or the Shades of Mort'ton minigame teleport), and talk to the Nature Spirit. He'll bless your secateurs, at which point they'll take on a green glow. 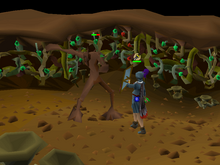 Head back to Zanaris. Grab your armour and food, and make sure to bring your magic secateurs. From the fairy ring, travel south-west, south of the Puro-Puro field, to the mysterious ruins of the Cosmic altar. (You can take one or two shortcuts if your Agility is 46 or 66 respectively.) At one side of the room is a gap through the wall you can climb through. The "Gatekeeper" there should let you through.

Inside the tunnel are a couple of Baby tanglefoots, and at the end of the tunnel will be a level-111 Tanglefoot - wield your magic secateurs to kill it. If you have the Protect from Melee prayer, it is recommended to use it.

It's also possible to flinch Tanglefoot using the mushrooms in his chamber.

Note: The Tanglefoot can be a tough fight due to the restriction of using only magic secateurs; however, by employing a hit-and-run strategy, you can avoid getting hit, as the enemy seems to avoid certain parts of the cave. A ring of recoil can be used to speed up the fight, however the killing blow must come from the secateurs. The Tanglefoot has a maximum hit of 11. With full rune armour, 50 Attack and 50 Strength, this boss can be easily defeated with a full inventory of decent food, no prayer, and 1 Farming. If you have Protect from Melee, you won't need any food. Once you have defeated the Tanglefoot, make sure to grab the Queen's secateurs before leaving the tunnel.

Flinching Tanglefoot using the mushrooms.
Note: The second row of tiles north after the big mushroom in the big room where Tanglefoot is situated, is the row that resets its aggro, which you use for the Hit and run strategy.

Important note for low level players: Even with magic secateurs equipped due to the formula that calculates the damage you deal against Tanglefoot, if your combined Strength level, Farming level and equipment strength is too low, you will not be able to damage the Tanglefoot and will keep hitting 0s (this is not you missing; this is your damage dealt being less than 0.5 and as a result rounded down to 0). It is recommended that your Strength and Farming levels add up to at least 30+ and to use easy to obtain Strength-boosting equipment such as an Amulet of strength, Climbing boots, etc.

Once you have defeated the Tanglefoot (some Baby tanglefeet level 45 might start to attack you), and have the Queen's secateurs in your inventory, head back to the Fairy Godfather, and speak with him once again. 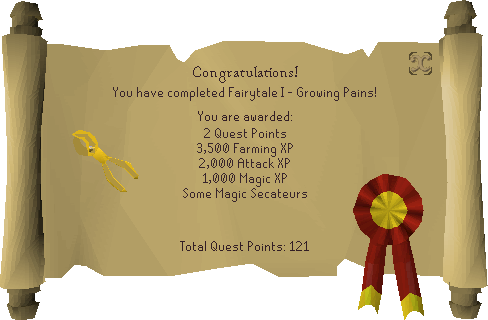 Fairytale I - Growing Pains is directly required for the following quests/miniquests: